Start a Wiki
watch 01:50
The Loop (TV)
Do you like this video?
Ura (played by Moira Orfei) is the secondary villainess in this 1963 Peplum film, "The Beast of Babylon Against the Son of Hercules".

The king of Babylon, the usurper Baldazzar (Piero Lulli), is a tyrant who also has maidens sacrificed to the goddess Ishtar. Ura is his chief priestess and conducts the rituals.  Ura has ambitions to become queen.

The hero Nippur (Gordon Scott), the son of Hercules, deceives the tyrant and Ura, who in the style typical of the peplum evil queen (even if Ura is an evil priestess), falls in love with the man who would destroy her.

During one of the sacrifices the hero tries to save the maidens; however he doesn't succeed, even if he escapes with his life. Later the hero is captured; however he manages to free himself from his bonds and to lead a rebellion against the tyrant.

Ura meets her demise as the hero follows her with the intention to kill her. In her fear she trips into the sacrificial pit, thereby getting a taste of her own medicine. 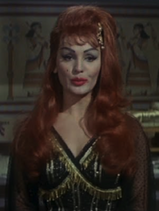 Add a photo to this gallery
Retrieved from "https://femalevillains.fandom.com/wiki/Ura_(Beast_of_Babylon_against_the_Son_of_Hercules?oldid=109313"
Community content is available under CC-BY-SA unless otherwise noted.