Ultra Witch (Julie Newmar) is an evil witch who is the villainess of 1976 episode "Ultra Witch" for the TV series Monster Squad.

Ultra Witch, along with her henchman named Toil (Richard Bakalyan) and Trouble (Joe E. Tata), have taken much of the world's milk supply by drying up the cows, demanding the release of her boyfriend The Wizard (Arthur Malet). and his henchman Mumbo (Victor Paul) and Jumbo (Mickey Morton). This has upset Walt and his monster friends because they like cookies. It has also hurt their friend Dandy Andy (Johnny Brown) and his cookie business. The monsters see Toil when he gets cookies knowing something must up for a guy to get cookies when the milk supply is supposedly drained.

Dracula (Henry Polic II) visits her lair. She is at first nice to him, as he wants her to give him a spell to finally see himself in the mirror. However, she eventually knocks him out with a drug and locks him away, Then, she is visited by Frank N. Stein (Mike Lane) and Bruce W. Werewolf. (Buck Kartalian) Ultra Witch uses her Ronald "Ray" Gun to turn them into cardboard stand-ups. This is even before Ronald Reagan was President. Dracula breaks out of the door, and Ultra Witch turned him into a cardboard stand-up as well.

Ultra Witch sent the cardboard cutouts of the monsters to Dandy Andy where Walt recovers them, but he knows that he has to find a way to turn them back. Meanwhile, Ultra Witch hatched another plot and starts turning all the world's soda into castor oil.

Walt (Fred Grandy) shows up to see Ultra Witch while pretending to be a reporter. He has her fooled and, when she leaves the room, he brings the cardboard monsters and gets them turned back to their normal selves again. Toil and Trouble try to defeat them with their magic brooms which look like regular brooms only with colored circles glued on them. The monsters win, but then Ultra Witch tries to zap them with the Ronald Ray Gun. They use a mirror to reflect the ray and turn her into cardboard. (It is unsaid is she going to stay this way and the series is lighthearted.) 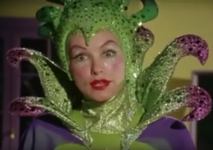 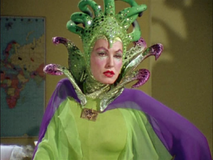 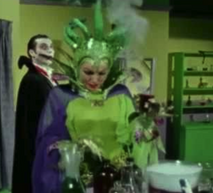 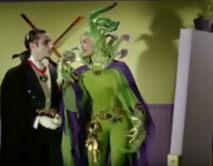 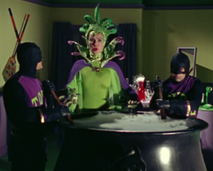 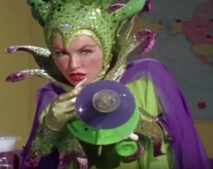 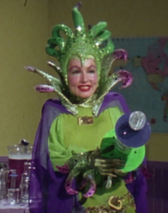 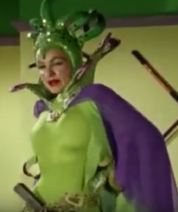 Retrieved from "https://femalevillains.fandom.com/wiki/Ultra_Witch_(Monster_Squad)?oldid=209428"
Community content is available under CC-BY-SA unless otherwise noted.