The Female Villains Wiki
Register
Don't have an account?
Sign In
Advertisement
in: 2000s, Assassin, Boots,
and 14 more

Typhoid (Natassia Malthe) is a villain in the 2005 film Elektra.

Typhoid was a member of The Hand and a powerful killer. During the head council of The Hand, one of the leaders calls Kirigi's team a "circus of freaks", but Typhoid poisons him with her powers, thus impressing the rest of the council. When Kirigi is assigned with the task to kidnap Abby Miller and kill her father and Elektra Natchios, from The Chaste who's become their protector, Typhoid follows him to McCabe's safe house, where the trio is hidden. When they arrive, Elektra and the Millers have escaped, leaving McCabe behind, but they are easily tracked down by the ninjas in the nearby forest. Typhoid reaches Elektra and has a brief fight with her, during which she easily defeats the ninja girl with her poisonous kiss. Just before Typhoid and Kirigi flee with Abby, Stickand his ninjas arrive and make The Hand escape with empty hands.

During the second fight between The Hand and Elektra, while Tatoo incapacitates Abby, Typhoid reaches her and, disobeying her master's order, she tries to kill her, since she's jealous, being her the previous Treasure. She manages to kill the girl, but Elektra stabs her with one of her sals immediately after, and then uses the Kimagure arts to resurrect Abby. Typhoid was a cruel and cold woman who uses her appeal to seduce and then kill her opponents. She's voluptous and mortal as a snake. Her powers allow her to emit poisonous gas from her body, especially from the mouth, and she uses a technique called Death Kiss to finish off her enemies by breathing poison directly in their lungs. 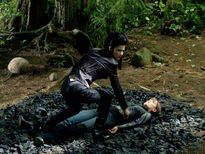 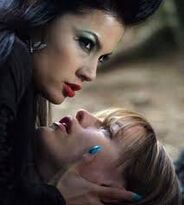 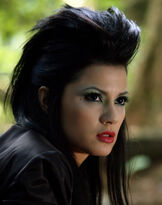