Start a Wiki
watch 01:48
The Loop (TV)
Do you like this video?
Trudy Malko (Missi Pyle) is the main villainess of "Granting Immunity", episode 16.19 of Law & Order: SVU (airdate April 8, 2015). She is the mother of Gabriel Dole, a student at the exclusive Tribeca Academy.

Trudy was also revealed as a zealous anti-vaccinationist, vehemently believing the (mostly false) evidence that vaccinations were harmful. Trudy's beliefs led her to conspire with several other mothers of Tribeca students to falsify their children's medical forms so they could avoid having to vaccinate them to enroll them at Tribeca, with Dr. Eric Setrakian providing the false documents.

Trudy's villainous deeds eventually led to a measles outbreak at Tribeca Academy, as Gabriel contracted the disease on a trip to the Pacific Palisades and spread it to several of his classmates. The outbreak also affected Olivia Benson's adopted son Noah, with the infant getting the disease through Gabriel's younger brother and later being hospitalized with severe pneumonia. Furthermore, the actions of Trudy and also various other mothers of Tribeca students were uncovered during an investigation of a sex party amongst Tribeca students which took place in the episode's opening minutes, with Mia Biel exposing Trudy as the mastermind behind the plan.

Trudy was confronted in her home by Olivia and Rafael Barba regarding her not vaccinating Gabriel and also helping other mothers ensure that their teens remained unvaccinated as well. Cornered, the villainess revealed her true personality by stating that she believed the risks of vaccination outweighed the benefits, while also accusing them of coming after her due to Noah becoming ill. Trudy and Dr. Setrakian were later arraigned together, with Setrakian opting to separate his trial from Trudy and accept a deal in exchange for his testimony. During the trial, Trudy approached Olivia as the latter was informed by the hospital that Noah's condition was worsening and that he had to be put on more antibiotics, with the arrogant woman claiming that Noah's worsening sickness could be caused by the antibiotics, much to Olivia's outrage.

While taking the stand, Trudy continued to argue her belief that child vaccination should be the parent's choice, citing how she believed vaccination was the reason her nephew was autistic. When confronted by Barba about the evidence disproving Trudy's beliefs, the villainess angrily stated she didn't trust the medical research and that Gabriel was her child and it was her decision not to vaccinate him. Ultimately, however, Trudy was found guilty of second-degree reckless endangerment by the jury, resulting in her being sentenced offscreen to three months in jail with nine months probation. 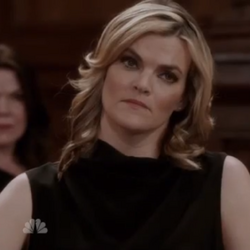 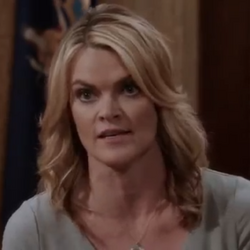 Add a photo to this gallery
Retrieved from "https://femalevillains.fandom.com/wiki/Trudy_Malko_(Law_%26_Order:_SVU)?oldid=198855"
Community content is available under CC-BY-SA unless otherwise noted.