Start a Wiki
watch 01:39
The Loop (TV)
Do you like this video?
Trudy Lively is a villainess from "Reap What You Sow", case #57 of Criminal Case: The Conspiracy, the 5th season of the crime solving game Criminal Case (release date February 14, 2019). She was a lawyer who was introduced in case #8, "Stonewalled" as a colleague of the case's victim Stella Ziarati, additionally appearing in "Breaking News" (case #54) before turning heel in "Reap What You Sow".

"Reap What You Sow" had Trudy being revealed as the lawyer of Christian Bateman, a conspirator in the supremacist group known as Ad Astra who had found dead near a helicopter he was planning to use to escape with his cohorts. It had also been revealed in "Breaking News" that Trudy was the lawyer of late Ad Astra conspirator Louis Leroux, who had attempted to blackmail Trudy into forging a court order to release him from prison, her having gotten Christian released from prison after he was arrested for the murder of Meera Kat. Despite the revelation that Louis threatened to harm her family if she didn't follow his order, Trudy was found innocent when Louis' true killer was discovered.

The investigation into Christian's murder in "Reap What You Sow" revealed that Christian was in possession of a fake passport identifying him as a British national named Rhett Ellis, with a note on the passport revealing the person who obtained the passport for Christian: Trudy. When confronted by the player and David Jones, Trudy confessed to forging the passport and doing the same for Christian's fellow Ad Astra cohorts, initially refusing before Christian offered her a lucrative bribe. After revealing that she hadn't asked by Christian's plans to maintain "plausible deniability", Trudy was placed under arrest for forging the passports. Trudy was later questioned again in prison when it was found an anonymous source (identified as Ad Astra mastermind Denise Daniels) had filled a safety deposit box in investment bank Poutt's for Trudy, with Trudy confessing that Denise had offered her money to act against Christian and the rest of Ad Astra. Trudy vehemently argued that she refused the deal out of loyalty to her client, and continued to argue that she would never kill Christian. While Trudy was ultimately proven innocent in Christian's murder, she remained under arrest for her crimes. 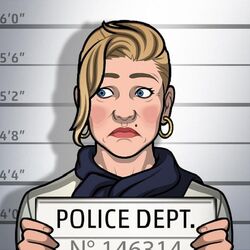 Add a photo to this gallery
Retrieved from "https://femalevillains.fandom.com/wiki/Trudy_Lively_(Criminal_Case)?oldid=169710"
Community content is available under CC-BY-SA unless otherwise noted.