The Tri-Chi Coven is an evil sorority of witches who were looking for a new recruit after leader Christy (Lara Wickes) used her magic wand to oust one of their members--doing so by turning her into a lawn gnome. According to Kim (Karen Cliche), Christy's second in command, the sorority is always supposed to have 13 members, to which Christy cackles evilly and suggests that they recruit off campus.

The coven appeared at Pleasantville High, where Tommy Dawkins suggests having his love interest, Stacey Hanson (Rachelle Lefevre), join the group so they could attend college together. Stacey is accepted by the sorority, much to Tommy's delight. However, Stacey began developing an arrogant attitude, stating in her own words that she wouldn't be seen with Tommy. Stacey again displayed her heel persona while being confronted by Tommy, who is reminded by Stacey that he's "out of her league."

It was after their confrontation that Tommy and Merton learn that the sorority is a group of evil witches, and at school, they learn that Stacey's initiation is at midnight--which includes a human sacrifice. Tommy and Merton crash the Tri-Chi house to save Stacey, only for the entire coven (Stacey included) to charge at the protagonists. Christy fought against Tommy (who morphed into his werewolf guise) while the others prepared Merton for their sacrifice. With Tommy being out matched by Christy (much to the delight of the evil Stacey), Merton decided to turn her and Kim against each other, doing so by revealing that Kim stated that Christy "looked fat in her dress." Tommy stated that Christy said that Kim's roots were showing. Angered by the insults, both witches pointed their wands at each other, resulting in the entire group becoming lawn gnomes. As for Stacey, she was freed from their evil control when Tommy removed her Tri-Chi pin. 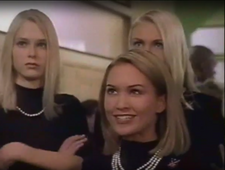 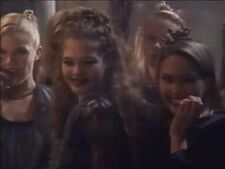 Stacey Hanson with the Tri-Chis 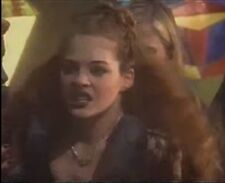 The coven's defeat
Add a photo to this gallery
Retrieved from "https://femalevillains.fandom.com/wiki/Tri-Chi_Coven_(Big_Wolf_on_Campus)?oldid=181541"
Community content is available under CC-BY-SA unless otherwise noted.