Trance (Karina) is a villainess from the 2001 short movie The Adventures Of O-Girl: Trapped In Time.

She helps her boss Hypnotika with her evil deeds: kidnapping Sarah Masterson and placing O-Girl into lethal death traps.

She seems to share Hypnotika's love of watching others struggle, and also finds it sexually stimulating, this is shown when she starts moaning and rubbing her body as she watches O-Girl struggling for her life in a sand trap.

She is left alone with Sarah Masterson while her boss leaves for a short while. Trance then starts molesting a bound Sarah against her will, before going back to watch O-Girl's predicament on the monitor. She is too busy touching herself and enjoying what she sees to notice that Sarah Masterson is actually not under a hypnotic spell any more. Sarah smashes a vase over the evil Trance's head and knocks her out, before going to rescue O-Girl from the death trap.

Trance is then placed under a hypnotic spell by O-Girl and the story ends there. The narrator speculates how vindictive O-Girl would want to be with the two women under her control. 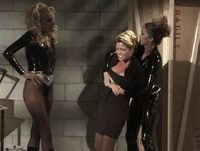 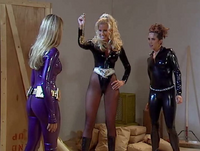 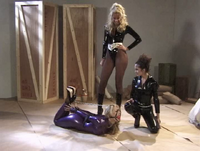 Kneeling down to enjoy the sight of a bound O-Girl 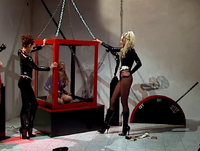 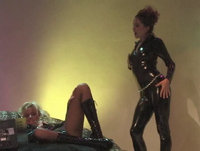 Touching herself as she watches O-Girl's misfortune on a monitor 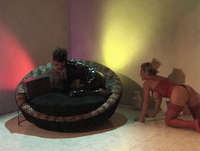 Too busy enjoying O-Girl's predicament to notice Sarah sneaking up on her... 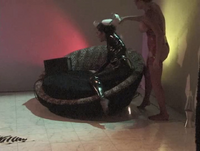 ...And knocking her out cold with a vase 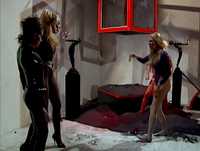 Hypnotised by O-Girl who uses the artefact on her
Add a photo to this gallery
Retrieved from "https://femalevillains.fandom.com/wiki/Trance_(The_Adventures_Of_O-Girl)?oldid=194678"
Community content is available under CC-BY-SA unless otherwise noted.