Tracy Spencer (Nadia Bjorlin) is the secondary villainess from the 2016 Lifetime film, I Know Where Lizzie Is (airdate July 31, 2016).

Tracy Spencer is an alleged "psychic" who was shown at the beginning of the film using her "visions" to locate a woman's lost dog. She was discovered on YouTube by the film's true main villainess, who had both Tracy and her husband Henry do the dirty work in her plot to kidnap and kill Rebecca's stepdaughter, Lizzie. After Henry successfully kidnapped Lizzie, Tracy appeared at the news conference and gave "psychic visions" regarding where Lizzie was kidnapped, leading police to a bridge where one of her shoes was found. She was also able to use information about the deceased wife of one of the lead detectives to convince them that her "powers" were real.

Tracy's reveal came when she was shown at her home donning a hood and red mask, approaching Henry and a tied up Lizzie. The purported plan was to get the ransom money, $2 million, to Rebecca, as well as help Tracy both achieve fame and get an undisclosed "new career." For most of the film, she had been successfully achieving the fame she desired due to the increasing amount of attention that the story was getting. However, Tracy was told by Rebecca (the mastermind behind Lizzie's kidnapping) that she and Henry were to kill Lizzie in order for her to inherit Martin's massive fortune. Tracy is initially shocked and unwilling to go through with Rebecca's greedy and murderous plan, but eventually concludes that there was no other choice.

Henry's unwillingness to murder Lizzie led to her being found alive, and after Lizzie identified her captors, the couple was arrested. Six months later, it was reported on the news that Tracy was in prison for her crimes. In the film's final scene, Tracy was shown sitting in the prison common room, giving "psychic readings" to her fellow inmates. 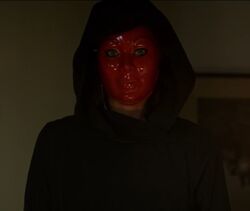 Tracy's villainous reveal
Add a photo to this gallery
Retrieved from "https://femalevillains.fandom.com/wiki/Tracy_Spencer_(I_Know_Where_Lizzie_Is)?oldid=197608"
Community content is available under CC-BY-SA unless otherwise noted.