Start a Wiki
watch 01:48
The Loop (TV)
Do you like this video?
Tracy Keller, aka Tracy Rosetti (Marisol Nichols), is the true main villainess of "Standoff," episode 2.06 of NCIS: Los Angeles (airdate October 19, 2010). She was Callen's former partner, though Callen referred to Tracy as his "ex-wife," as they posed as a married couple.

Tracy was shown at the beginning of the episode holding a Navy Recruitment Center hostage; she first shot a security camera from outside the building first before entering with a shotgun. The hostage situation was actually Tracy's way of contacting Callen, and after he and the rest of NCIS appeared, she informed him that she was on the run from the United Brotherhood, a white supremacist group. Tracy then apparently killed one of the members, but it was later revealed that the man she killed was an FBI agent.

After her deception, Tracy is taken to the boathouse for interrogation, where she claimed that she was working undercover for the FBI to stop an arms deal. She also stated that a number of agents went rogue and became part of the deal, and video evidence showed that Agent John White was one of them—as he was supposed to kill Tracy. This led to Callen and Tracy setting up a meeting with White, which ended with Tracy killing him and taking his cellphone, which had the time and place for the meeting, which was with arms dealer John Thomas Mason. The group later sold fake SIM cards to Mason as part of their plan to capture him.

After Callen let Tracy get away, however, it was discovered that the latter was actually the villainous mastermind behind the deal. The presence of Tracy's fingerprints all over the phone she took from White confirmed her villainous reveal; she (assumingly) planned for him to take the fall for said deal. Furthermore, Tracy made the decision to kill White in order to make sure that her true role as a greedy villainess remained hidden. After she escaped with the cash, the evil Tracy headed to the Cayman Islands, and it was on her boat that she encountered Callen, who confronted her with the evidence proving her guilt and also revealed that he and partner Sam Hanna had been tracking her. She was later arrested offscreen by the duo. 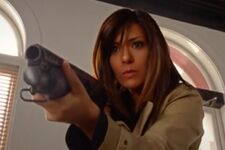 Add a photo to this gallery
Retrieved from "https://femalevillains.fandom.com/wiki/Tracy_Keller_(NCIS:_Los_Angeles)?oldid=197970"
Community content is available under CC-BY-SA unless otherwise noted.