Start a Wiki
watch 01:48
The Loop (TV)
Do you like this video?
Tracy Horton (Delta Burke) is the main villainess from the 1996 film, Maternal Instincts.

Tracy Horton is a woman obsessed with becoming a mother, but while undergoing a medical procedure, her doctor, Eva Warden, discovers a cancerous growth and performs a hysterectomy to save her life. Despite this, Tracy is left distraught because her chances of becoming a mother are gone. After learning that her husband, Stan, and Sabrina, her close friend, gave Eva full permission to perform the hysterectomy, Tracy becomes enraged. She engages in an argument with Stan, which later became physical and resulted in his "accidental" death.

Subsequently, Tracy decided to set her vengeful sights on Eva Warden, especially when she learns that Eva is pregnant. She does everything she can to cause Eva to miscarry, including (but not limited to) sabotaging her medication, trying to get her fired, and even nearly running her down at a grocery store. Tracy even lusted after Eva's husband, Gary, while at a construction site. While doing so, she encounters Sabrina, who confronts her and figures out what she's up to. At that moment, the evil Tracy pushed Sabrina off the roof of the site, and watched as she fell to her death.

Tracy continued her seduction on Gary, but he turns her down during a dinner date. As payback, Tracy runs him down with her car and delivers him to Eva's house. He actually survived, and Eva takes him to the hospital, where she goes into early labor and gives birth to her baby daughter, Melissa. Tracy entered dressed as a nurse and tried to kidnap Eva and Melissa, leading to a confrontation between her and Eva--which included Tracy wielding a huge wrench at her. The brawl ends with Eva knocking Tracy out and escaping with her daughter. At the end of the film, a deranged Tracy is shown in a padded cell singing a lullaby to a doll, while vowing to kidnap another baby.

Tracy snaps and kills her husband

The evil Tracy watching Sabrina fall to her death 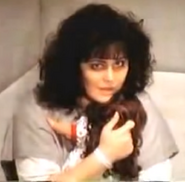 A deranged Tracy in a mental institution, cradling a doll

Add a photo to this gallery
Retrieved from "https://femalevillains.fandom.com/wiki/Tracy_Horton_(Maternal_Instincts)?oldid=120935"
Community content is available under CC-BY-SA unless otherwise noted.