Start a Wiki
watch 01:48
The Loop (TV)
Do you like this video?
Tracy Blaine (Sara Canning) was the true main villainess of "Interference," episode 4.06 of Motive (airdate April 26, 2016). A woman in her late twenties, she was the second wife of Steven Blaine (the owner of an organic juice company called Drink Your Vegetables), along with being a popular mommy blogger who was the stepmother of Steven's son Owen.

Tracy's past revealed that she was once in a relationship with a man named Martin Harris, who was the father of a young boy named Aiden Harris. It was also uncovered that she was most likely suffering from Munchausen syndrome by proxy, as she would habitually poison her then-fiancé's son in order to get his attention. Her modus operandi was giving Aiden fruit-flavored antacids (which were laced with sodium bicarbonate) under the guide of giving him candy. Tracy's actions eventually resulted in Aiden dying four years before the episode's events, after which she broke off her engagement to Martin.

Cindy Vernon—Aiden's music teacher, Dean Teller's girlfriend, and the episode's anti-villainess—suspected that Tracy was Aiden's poisoner and murderer, but she couldn't prove it in her complaint to Child Services. The unhinged woman later married Steven following the death of his first wife in a car accident three years prior, resulting in her becoming Owen's stepmother; however, she had trouble bonding with her stepson. At some point before the episode's events, the evil Tracy began poisoning Owen with the aforementioned antacids as well, along with starting a popular online mommy blog on which she discussed a lot of personal information (including dealing with Owen's seizures, vomiting, and tremors). Basking in the immense attention she received, her viewers and even Steven remained unaware of Tracy's true colors.

Furthermore, Tracy and Owen were followed around by Cindy for weeks, as she not only found out about the blog, but also correctly figured out everything about the former's evil past and her plans. Minutes before the episode's events, Cindy tracked them down to Central Park, where Tracy caught her and threatened to call the police on her, only for the former to announce that she would call them herself and lash out at the twisted criminal for her deeds. Her response was to snarl at Cindy as she threatened to get a restraining order against her before snatching her phone from her and also demanding that she stay away from her and her stepson. Seconds afterwards, a struggle ensued between the two women, resulting in Tracy becoming impaled on a tree branch. She begged for Cindy to help her, but the latter decided to further impale the attention-seeking villainess and kill her in order to save Owen's life. 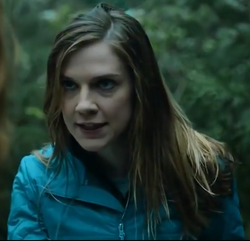 Tracy during her confrontation with Cindy 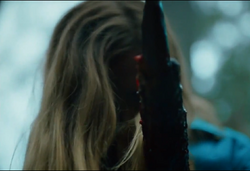 Tracy's corpse
Add a photo to this gallery
Retrieved from "https://femalevillains.fandom.com/wiki/Tracy_Blaine_(Motive)?oldid=196635"
Community content is available under CC-BY-SA unless otherwise noted.