Start a Wiki
watch 04:10
The Loop (TV)
Do you like this video?
Traci Brooks is a former professional wrestler, manager, and referee best known for competing in TNA, where she portrayed a villainess.

Traci spent her first year in TNA as a villainous valet and feuded with Knockouts such as Trinity and Goldylocks. Her second stint as a villainess began in 2006 when she returned to TNA as Ms. Brooks, the evil business manager to Robert Roode. During her role, Traci engaged in an interesting feud with Eric Young, which included losing to Young in a bikini contest. She would later seduce Young into signing a contract with "Robert Roode, Inc.," and she and Roode basically bullied Young. Traci also engaged in a feud with Gail Kim for a brief period of time. Traci's heel role came to an end when she was continuously on the receiving end of verbal abuse from Roode and was eventually fired.

Traci returned to TNA in 2009 as the hidden villainess in a Knockouts Battle Royal, where the winner would receive $50K and a spot with the Main Event Mafia. Traci originally served as a referee, only to win the match herself and join the faction, cementing Traci as a villainess. After her heel turn, Traci blasted TNA for not calling her while she was on her hiatus and proudly deemed herself as property of the MEM. Traci engaged in feuds with Knockouts such as Taylor Wilde and Christy Hemme, which included a "Battle of the Playboy Covergirls" match between Traci and Christy, which the latter won. After the match, however, the evil Traci attacked Christy. The MEM disbanded in October 2009, ending Traci's villainous role. 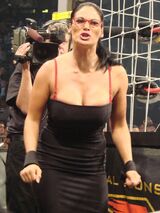 Traci as a member of the Main Event Mafia 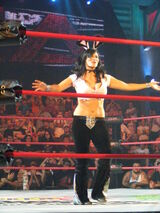 Traci as a villainous Playboy Bunny 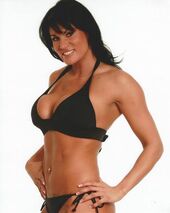 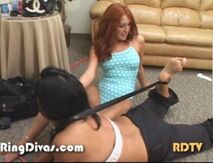 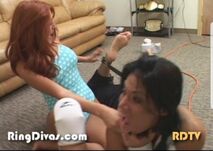 Add a photo to this gallery
Retrieved from "https://femalevillains.fandom.com/wiki/Traci_Brooks_(TNA)?oldid=203514"
Community content is available under CC-BY-SA unless otherwise noted.