Start a Wiki
watch 04:10
The Loop (TV)
Do you like this video?
Tracey Buxton is a henchwoman in Batman: Arkham Origins, a 2013 action-adventure video game developed by WB Games Montreal and published by Warner Bros. Interactive Entertainment for Microsoft Windows and the Playstation 3, Wii U and Xbox 360 video game consoles.

Tracey was a high-ranking officer in The Penguin's Gang, alongside Candy. She acted as an enforcer and was onboard the Final Offer, protecting Penguin's safe room from Batman.  She also appeared at the Boiler Deck, where she oversaw the Boiler Deck's Death Matches.

Tracey had a Cockney style British accent.  She had short blonde hair, and wore a short miniskirt with white/grey and an aqua tint to it.  She had two earings, bracelets and a necklace that hung down to her ample cleavage.  Tracey's lovely legs were accented with fishnet stockings and black high heals.

Tracey was next seen in the casino and sent more thugs to finish Batman.  Before having a conversation, Batman snuke up behind Tracey and she reached out for her wooden baseball bat to attack him.  However, she was imprisoned by him in a cell in one of the rooms not long after trying to talk to Candy.  Tracey protested her imprisonment due to her being claustorphobic.

Tracey somehow managed to escape for her cell and was next seen after Batman's fight with Deathstroke, with Candy and Penguin.  She presumably spent the night with the Penguin.

It was assumed that Tracey later guit Penguin's gang or was killed for some reason, as she was never seen or heard from again in the later Arkham games. 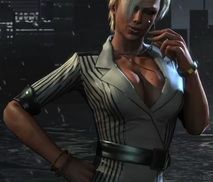 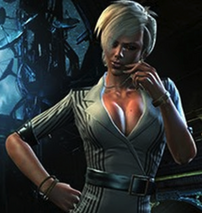 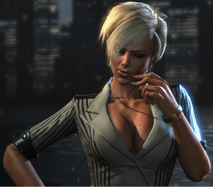 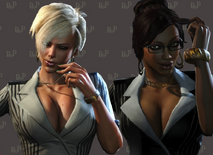 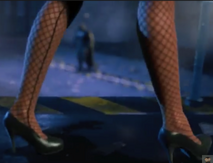 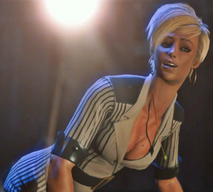 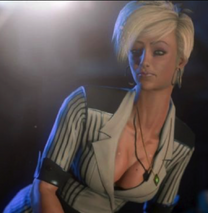 Add a photo to this gallery
Retrieved from "https://femalevillains.fandom.com/wiki/Tracey_Buxton_(Batman:_Arkham_Origins)?oldid=70564"
Community content is available under CC-BY-SA unless otherwise noted.