Dr Toulouse is threatening to sell the formula for a pill - "vitamin Q" -  he's developed, which confers superhuman strength, to the criminal syndicate Thrush - unless UNCLE pays him $5 million. UNCLE sends agents April Dancer (Stefanie Powers) and Mark Slate (Noel Harrison) to a Caribbean island where Dr Toulouse has a kind of sanitarium, under orders to destroy the scientist's formula and pills - however, if they fail to do this, they are to pay the doctor the money he's demanding. The money is in the keeping of UNCLE's man on the island. Unfortunately, Mark and April find he's been killed, and now have no idea where the $5 million is.

The UNCLE duo infiltrate the Toulouse sanitarium, where the doctor is providing a group of very old people with his pills to "rejuvenate" them (for a large fee!).

The premises are crawling with guards - a group of extremely tall women Dr Toulouse gives his pills to in order to increase their strength. They are led by Rabbit (Tura Satana). Mark and April are captured and Dr Toulouse puts them in a death trap. With only their necks and heads exposed, the doctor sends mini robots in their direction which are primed with explosives - he will only stop them if they reveal the location of the $5 million (they can't - they don't know it). But before they can be killed, Nadia Marcolescu (Yvonne De Carlo), supposedly the doctor's lover, interrupts things. The robots are halted, and Nadia reveals herself as a Thrush agent who intends taking the pill formula for the crime syndicate and awarding herself the $5 million.

The henchwomen guards are with her, turning out to be working for Nadia, not Dr Toulouse, who is taken prisoner.

Nadia now puts Dr Toulouse himself into his own mini robot death trap (which proves fatal for him) and she and the female guards take Mark and April away to use their own methods to try to get them to reveal where the money is. However, the villainesses are ambushed by the old people - hyped up on the Toulouse tablets - and with Mark and April battle Nadia and her girls, easily defeating them. The villainesses end up knocked out and lying on the floor. The pills and the formula are destroyed and April and Mark eventually uncover the hiding place of the missing UNCLE cheque for $5 million.

Weapons - In some scenes they carry the special Thrush rifles - one is seen with a pistol (luger).

Fate - Knocked out and presumably arrested.

Notes - Unfortunately, in some instances during the final fight the female guards are clearly being doubled by stunt men in wigs (maybe tall stunt women were impossible to find?). 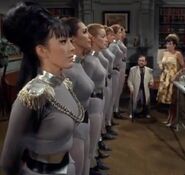 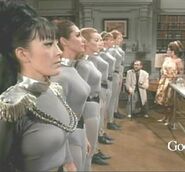 Inspection of the Elite Guards 2 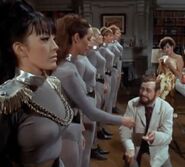 Inspection of the Elite Guards 3

Inspection of the Elite Guards 4

Inspection of the Elite Guards 5

Linda Albertano and Ilona Wilson, on patrol.
Add a photo to this gallery
Retrieved from "https://femalevillains.fandom.com/wiki/Toulouse_Elite_Guards_(The_Girl_from_UNCLE)?oldid=196311"
Community content is available under CC-BY-SA unless otherwise noted.