Tora Weeks (Zoie Palmer) was a hidden villainess from the 2013 Lifetime film, Her Husband's Betrayal (airdate August 2, 2013). She was introduced as a new neighbor and friend of main protagonist Cathy Coulter, who moved to their current location along with her husband, Riley, and her son (from a previous marriage), Billy.

As revealed later on, Riley's real name was Carl Higgins, and he had been marrying and killing different women for their life insurance benefits. After being framed and set up for Carl's latest murder, Cathy phoned Tora regarding "Riley." Later on, Tora was believed to be attacked and possibly killed by Carl, as Cathy found only blood at Tora's place when she looked for her. In actuality, Tora was a villainous co-conspirator, as she assisted Carl in Billy's abduction.

Tora's reveal came when Cathy met Carl and Billy and demanded to know what happened to Tora, only for the villainess to appear with a knife pointed at Cathy. She later took Cathy's gun from her possession, and the villainous duo left with Cathy and Billy, with the former of the protagonists revealing to Tora that Carl was planning a one-way trip to Argentina and also planning to leave Tora to be apprehended by police. Tora demanded that Carl open his briefcase, as Cathy stated that the passport (among other pieces of evidence) was inside. Carl attempted to shoot Tora, only for Tora to shoot and kill Carl. Afterwards, the evil Tora pointed the gun at Cathy with intent on killing her, but it was at that moment that Tora looked inside the case and realized that there was actually cans inside it, as Cathy had approached a homeless woman and placed the evidence in her cart in exchange for some of her old cans. As Tora looked at the case, realizing her scheme had failed and she had been exposed, Officer Gresham arrived to arrest her. Tora fired a shot at Officer Gresham, only to meet her ultimate comeuppance when Tora is shot and killed by Cathy. 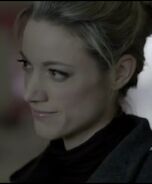 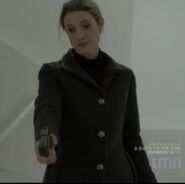 Tora pointing a gun at Cathy
Add a photo to this gallery
Retrieved from "https://femalevillains.fandom.com/wiki/Tora_Weeks_(Her_Husband%27s_Betrayal)?oldid=202841"
Community content is available under CC-BY-SA unless otherwise noted.