Start a Wiki
watch 01:51
The Loop (TV)
Do you like this video?
Toots Sweeney was a villainess in the 1940s comic book ‘Blue Circle Comics #4’, appearing in the Gail Porter story. She is a beautiful gun moll who bears a passing resemblance to Gail Porter. Toots is currently in prison for murder.

Toots first appears in prison when Gail comes to interview her and take pictures. She acts sweet and innocent to make Gail lose her guard. However, she knocks Gail out, puts on her clothes and escapes! Gail spends much of the comic hunting Toots down.

She later appears near the end where she comes in on Gail with a pistol and threatens Gail to give back the camera, which can be traced back to her. Gail “gives it to her” by throwing the chunky camera at the gun-wielding bad girl, smacking her straight in the head! Then, Gail punches her out. Toots is then arrested by the police. 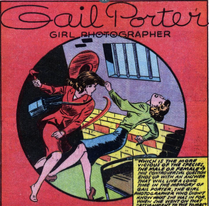 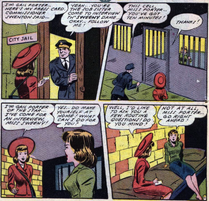 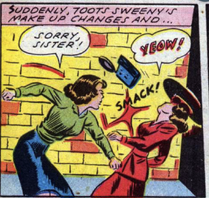 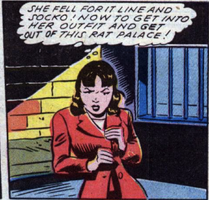 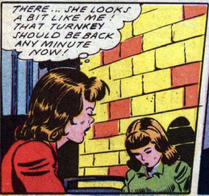 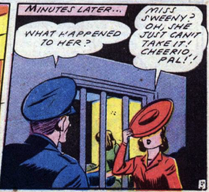 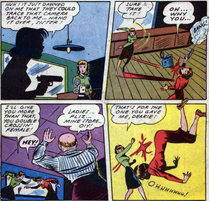 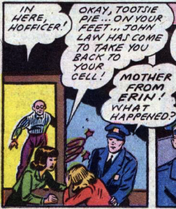 Add a photo to this gallery
Retrieved from "https://femalevillains.fandom.com/wiki/Toots_Sweeney_(Blue_Circle_Comics)?oldid=155851"
Community content is available under CC-BY-SA unless otherwise noted.