Toni Marshall (Jamie Luner) is the secondary villainess of the 2012 Lifetime film Stalked at 17. She was the mother of the film's main villain, Chad Bruning. When Chad was young, Toni got involved in a robbery in which a man was shot, leading to her being imprisoned. Chad grew up to resent her for abandoning him. But after he meets teenager Angela Curson and gets her pregnant, he turns to her for help when her family realizes how unbalanced he is and gets a restraining order against him to keep him away.

Once she is released, Toni goes to Lauren, her former employer and the woman who raised Chad during her imprisonment. She apologizes for all she had done and asks to be rehired so she can be a part of Chad's life, but Lauren says she doesn't believe that is appropriate. Toni acts as though she understands, but scowls as she leaves the house. Later on, Toni helps her son kidnap Angela and her baby. As they drive, Toni looks adoringly after Angela's baby. She picks up on Angela's attempts to assuage Chad by playing into his delusions of wanting a life with him and tries to convince Chad of this. This angers Chad and causes him to pull over and rant about how he hates his mother for abandoning him, finishing it off by saying how he has hated her his entire life.

With the baby in pain from teething, Chad stops at a convenience store, where Angela leaves a message in the bathroom pleading for help. When a woman at the store sees it and alerts the owner, he tries to keep them in the store as he alerts the authorities via the alarm. When Chad tries to leave with Angela, the owner pulls out a gun. Chad tries to shoot the man, but he gets the first shot, wounding Chad. When Angela walks out of the store to get her son, Toni gets out and asks what happened to Chad. When she sees him, she gasps and holds him in his arms. As Angela stands over them with her baby while the police arrive, Toni scowls at her. The ending leaves things ambiguous, but it can be inferred that Toni is sent back to prison.

Toni at her parole hearing 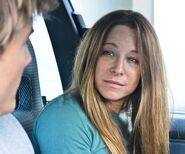 Toni when she is released and picked up by Chad

Toni after Chad is shot
Add a photo to this gallery
Retrieved from "https://femalevillains.fandom.com/wiki/Toni_Marshall_(Stalked_at_17)?oldid=196226"
Community content is available under CC-BY-SA unless otherwise noted.