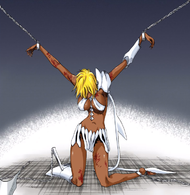 Harribel has olive skin, aqua eyes, thick eyelashes, and short golden blonde hair; which she usually keeps messy with three braided locks. She wears a variation of the Arrancar jacket with a high collar, which covers the lower part of her face downward, while baring a good portion of the lower half of her large breasts. The jacket has a zipper running along its entire length, which is opened from the bottom upwards. It has a beige air filter on either side just below the trim. The jacket's sleeves completely envelop her arms, terminating in black glove-like extensions at her extremities, resembling the appearance of a cat's paw.

The remnants of her Hollow mask consist of the sides of her face, her mouth, and an extensive area below and around her neck extending down to, and also covering, her nipples. She usually hides these remnants from view with her jacket. Her Espada tattoo is placed on the left side of her right breast. The location of her Hollow hole is in her lower abdomen where her womb would be. Her appearance before she became an Arrancar mostly resembled her released state, but most of her body and face was covered by white Hollow bones, and her weapon was part of her arm, but her hair and eyes were exposed.

Harribel is calm, taciturn, level-headed, and analytical, preferring to not engage in combat: she is content with silently observing both parties until the fighting reaches its conclusion.She strongly opposes the notion of killing others, especially if done to gain power but when she is betrayed by Sōsuke Aizen, Harribel angrily attacks him, proving she can be quite aggressive and brutal. Harribel cares for her Fracción, being noticeably upset when she senses their presences fading, and angrily assaults Tōshirō Hitsugaya seconds after their defeat at the hands of Captain-Commander Genryūsai Shigekuni Yamamoto. Prior to her betrayal by him, she viewed Aizen and his powers in high regard.

Due to censorship, Harribel's design was modified slightly between the anime and manga. In the anime, Harribel's outfit is extended to fully cover her breasts, and her pants reveal less of her thighs, but when she attended the creation of Wonderweiss Margela, the underside of her breasts is visible. This implies the change to her outfit was made later. During the revealing of her Espada rank tattoo in the anime, the remnants of Harribel's hollow mask are extended to cover the underside of her breasts. Notice the black stripe on the jacket which shows where the original bottom of the jacket was and where her original mask fragments ended. In her released form, her nipple coverings are extended to cover the undersides of her breasts, and extend around back like a bra. Her skirt is extended, with triangular points at the end, and the area of darkness underneath is expanded. 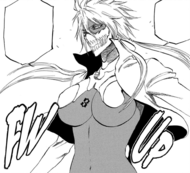 Retrieved from "https://femalevillains.fandom.com/wiki/Tia_Harribel_(Bleach)?oldid=149045"
Community content is available under CC-BY-SA unless otherwise noted.