In the episode "Operation: Spy Trap", Sandra West (Olivia Dunkley) has been abducted.  Superseven (Jerry Kokich) is out looking for Sandra in Canyon de las Muertas and runs into Thunderpussy at the entrance to a cave with her two henchwomen, Madame Piranha (Rosanna Rizzuto) and Madame Wasabi (Vanessa Suarez).  After introductions take place, Thunderpussy tells her henchwomen to take care of Superseven.  They pull out their pistols and are about to fire, when they are shot by Superseven's dart gun that is hidden in his wrist.  The two henchwomen fall to the ground, and Superseven apologizes, saying that good help is hard to find.  He tells Thunderpussy that they will wake up in six hours.

Thunderpussy then engages in a martial arts fight with Superseven, and he gets the best of her.  She tells Superseven that she will call this one a draw, and reminds him that it is two out of three falls.  With that she disappears in a cloud of smoke.

In this episode, T.H.E.Y. has hatched an elaborate plot to assassinate T.H.E.M. agents.  We see Sandra being followed by an assassin.  Sandra eliminates him, and then hears the voice of Thunderpussy taunting her.  Thunderpussy tells Sandra that they have some unfinished business.

Suddenly, Thunderpussy cartwheels out from behind a wall and shoots Sandra in the stomach.  Thunderpussy assures her that she will have the finest funeral that T.H.E.Y. can afford.  Sandra stumbles to a nearby stairwell, and Thunderpussy shoots her in the back.  When she arrives at Sandra to inspect her, she pulls off a mask to reveal that Sandra is in fact a man, Agent 000X.

Walking away from the body, Thunderpussy meets with Big O (Kurt Carley), the boss behind T.H.E.M.  He tells Thunderpussy that she will get her second chance with the real Sandra West later.  He also tells her to initiate the plan of Operation Body Count.  Thunderpussy tells him "with pleasure".

In this episode, Thunderpussy appears along with Dr. Boris Goodinoff (Joe Foley) in front of Big O (Kurt Carley) to give their report on Operation Bodycount.   Thunderpussy is not wearing her usual mask and full body suit.  Instead, she is dressed in a blue dinner gown.  She tells Big O that Sandra West has eliminated seven T.H.E.M. agents but has failed to recover the secret chip from Lexi Savage .  Boris tells him that the diabolical chip has not been perfected yet, which means that the chip implanted in Sandra West is only able to control her for short periods of time.  Thunderpussy chimes in that she is unaware of what she is doing, or that she is working for T.H.E.Y., making her the perfect assasin.  Thunderpussy suggests that Sandra could infiltrate T.H.E.M. headquarters and liquidate Col. White.

Boris makes unwanted sexual advances with Thunderpussy by grabbing her ass.  She tells him that if he does that one more time, she will rip off his arm and beat him with it.

Operation: Have Silencer, Will Travel (episode 25)

In the episode Thunderpussy is waiting in a alley along with her henchwoman Madame Wasabi who is holding a semi-automatic gun.  They are poised to meet Millie (Melanie Camp) and Sic (Brooke Pascoe), two henchwomen tasked with exchanging Sandra West.  However, the hired henchwomen have messed up on the coordiantes and are waiting in an adjacent alley.  Thunderpussy is wearing a black lycra jumpsuit, and her eye mask is missing.  All that covers her face is makeup to appear like a mask.

Thunderpussy begins to get uneasy, and Wasabi assures her that they are reliable.  Meanwhile, Sandra has broken out of her trance caused by the mind control chip, and has disposed of the henchwomen with a purse gun.

When Sandra West shows up, Madame Wasabi shoots her several times with her gun.  Sandra appears to collapse and die, and Thunderpussy is less than pleased with her henchwoman.  She claims that she was too valuable an asset to kill her.  With that, she gave Wasabi a karate chop to the neck, which knocked the beautiful henchwomen out.

When Thunderpussy goes to Sandra, she is surprised to find her alive.  Sandra knocks her off her feet and looks up to find that Sandra was wearing a bullet proof top.  The two engage in a nice martial arts event, where each women get some significant licks on the other.  It appears that Thunderpussy has Sandra in a full nelson, but is thrown up and over.  However, Thunderpussy uses a device on her wrist to once again put Sandra under mind control.

Thunderpussy tells Sandra that she enjoyed their little match, but apologizes that they won't have time for a second round.  She tells her that despite being quite a nusiance, all has been forgiven.  Thunderpussy suggests, that Sandra will go home, take a hot bath, eat a pint of ice cream, and forget all of this happened.  When she has recovered, she will be sent to liquidate Superseven.

When Madame Wasabi woke up later, Thunderpussy was nowhere to be found, and she was abandoned in the alley by hersefl.

Operation: A Funny Thing Happed on the Way to Rescue Sandra West (episode 30)

The episode begins in the park where we find Thunderpussy and her henchwoman Madame Wasabi walking across a field.  As they approach a man named Boris Goodinoff (Joe Foley) who is lying face down, receiving a massage from Ilsa (Maria Leicy).  Wasabi tells Thunderpussy that Boris has been recruited directly from Alcatraz into T.H.E.Y., and has been selected for a fist fight with Superseven.  Thunderpussy and Wasabi act like school girls at the sight of the stapping man, and decide to take a closer look.

What follows is a farce on the 1963 James Bond film "From Russia With Love", in which Col. Rosa Klebb (Lotte Lenya) met Red Grant (Robert Shaw) at SPECTRE Island, as he was receiving his daily rub from his masseuse (Jan Williams).  In the Bond film, Rosa punched Red in the stomach with a knuckle duster to test his strength.  Grant barely flinched and Klebb left, telling him to report to her in Istanbul in 24 hours.

Thunderpussy yelled out Goodinoff's name, and he immediately hoped to his feet at attention.  She continued by telling him he looked fit.  As she said this, both she and Wasabi grinned in approval.  They asked if he was being fed well, and Boris responded with his typical menu, but added that he would prefer a side of wasabi.  To this, Ilsa gave a disapproving look toward Madame Wasabi, realizing that there was some sexual tension between the two.  Thunderpussy then asked if he was ready to take on Superseven.  Wasabi handed her a brick and she through it at him.  The brick bounced harmlessly off his abs and didn't even faze him.

Next Thunderpussy walked around Boris inspecting him.  She pulled out a pair of brass knuckles, and used them to punch Boris in the groin.  At first Boris withstands the blow, but eventually, he falls face first on the ground.  Thunderpussy and Wasabi are utterly disappointed.  She comes to the realization that Boris is not up to snuff.  However, she tells Ilsa and Wasabi that when Boris recovers to send him out on the mission anyway.  The two walk away, leaving Ilsa to look down on the knocked out agent.  In her Eastern European accent, she attempts to wake him up.  When he is unresponsive, she tip toes away.

Thunderpussy is dressed all in black and performing a karate solo exercise in the park.  After completing an exhaustive routine, she is met by her henchwoman Madame Wasabi who is escourting Natasha Pushima (Inga Van Ardenn).  In the previous episode, Natahsa was tasked with a fistfight against Sandra West, and lost.

Thinking that her failure is about to result in her death, Natasha submits to Thunderpussy and is prepared to accept her punishment.  Natasha does not have the best handle on the English language and often mixes up her words.  She tells Thunderpussy that she believes she is intended to be laminated.  Thunderpussy and Wasabi laugh, and tell Natasha that she means "eliminated".  They remind her that T.H.E.Y. don't do that for failure anymore, and that the other organization is the one that does that.  However, just then we hear in the background another agent getting shot.  Thunderpussy reminds Natasha that she is much more valuable to T.H.E.Y. alive then dead.  She goes on to say all that she requires are answers to why she allowed Sandra West to win the fight.  Natasha explains that Sandra was tougher than her looks and her fighting skills were non-predicatable and did not resemble any traditional martial arts style she had ever seen.  Sandra's fighting skills were fast, furious and confident, and losing does not cross her mind.  Once again, Natasha wondered if she was going to be punished, and Thunderpussy tells her that she wants her to fulfilly her assasination quota.  Wasabi adds that two more and she will be Assasin of the month.  Thunderpussy adds, "And continue to train hard.  Who knows maybe we will arrange for a rematch between you and Miss West".

Sandra West is having a procedure to remove the mind control chip that was implanted into her head by T.H.E.Y.  While she is out, she has a dream, that includes her walking through a park and coming up on Thunderpussy who is playing a violin.  She is dressed in a long blue gown with her hair pulled back on her head.

Thunderpussy tries to convince Sandra into coming and working for T.H.E.Y., saying that she has a lot in common with her.  In addition, she tries to tell her that Superseven does not have her best interest at heart.

Abot that time, Superseven shows up with an AR-15, and tells Thunderpussy to drop her violin.  He then tells Sandra that she is coming with him.  Thunderpussy is left disappointed, and says "Darn!", while playing a sour note with her violin. 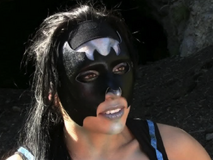 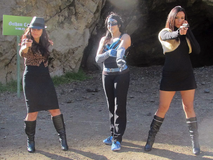 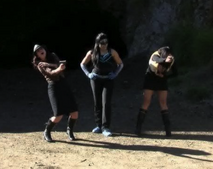 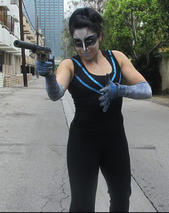 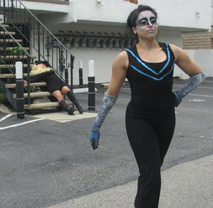 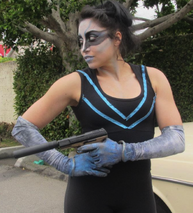 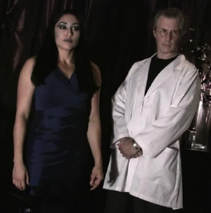 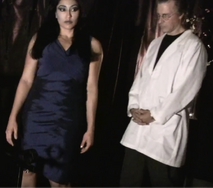 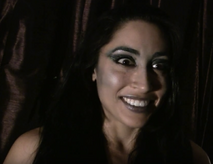 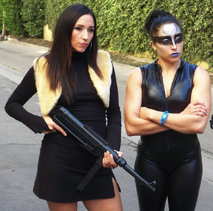 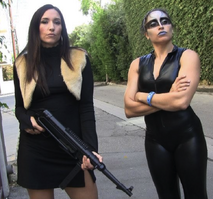 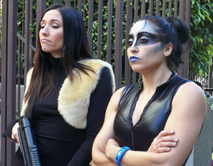 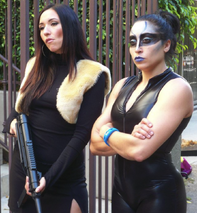 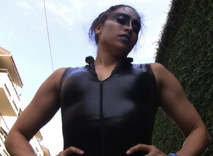 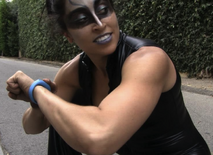 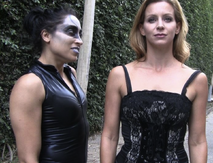 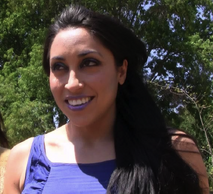 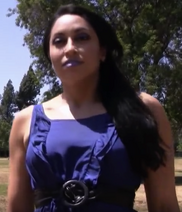 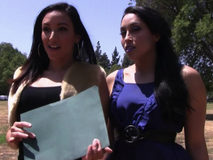 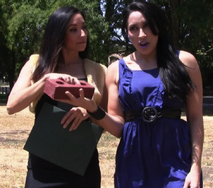 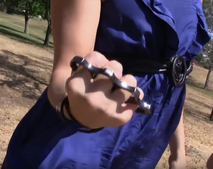 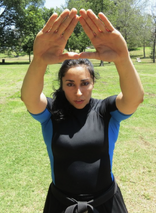 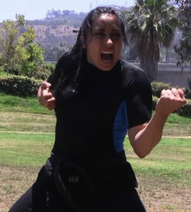 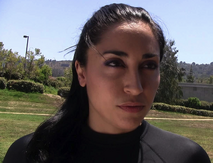 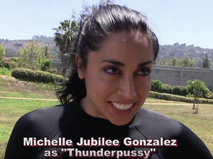 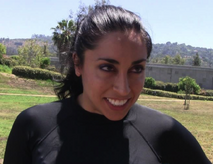 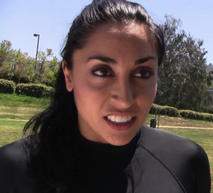 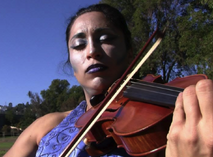 Add a photo to this gallery
Retrieved from "https://femalevillains.fandom.com/wiki/Thunderpussy_(The_Adventures_of_Superseven)?oldid=166362"
Community content is available under CC-BY-SA unless otherwise noted.