Start a Wiki
watch 01:48
The Loop (TV)
Do you like this video?
The Witch (Ellie Harvie) is the hidden main villainess from "Stage Fright," episode 2.15 of The Haunting Hour (airdate January 14, 2012). She is the actual witch from the story of Hansel and Gretel, which has been adapted into plays at five different schools. However, the Witch was upset over the inaccurate versions of what she considered "her story," so she cursed the play, with all five schools being affected.

The episode's events featured the Witch doing the same to a musical version of Hansel and Gretel that was taking place at a high school. She abducted and tied up the cast of the play, and was (partially) shown using her magic to contort Gina (who was playing the Witch in the play) during her yoga session, while telling her to witness some real acting from a real witch. After Jen and Sam subdue their drama teacher--under the belief that she's a real witch--the Witch appeared in the episode's climax, revealing herself as the actual witch from Hansel and Gretel and informing the audience that what they witnessed was not how the story went.

The Witch lowered the curtains but raised them back up again, revealing the entire cast and stagehands either tied up or in a cage, with apples in their mouths. She then forced the entire cast to sing, and gave and evil cackle as she turned their fake oven into a real one. After the performance, the Witch stated that she cursed the play because of its inaccuracies, and she also revealed that she didn't eat Hansel and Gretel--she ate their parents. The episode ends with the Witch shutting off all of the lights, causing the audience to scream in horror. 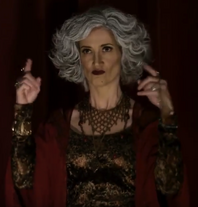 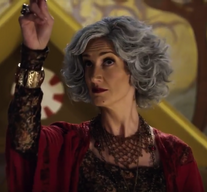 Add a photo to this gallery
Retrieved from "https://femalevillains.fandom.com/wiki/The_Witch_(The_Haunting_Hour)?oldid=148707"
Community content is available under CC-BY-SA unless otherwise noted.