Three witch siblings from the planet Theogkoor travel to Earth with the intention of conquering it. There is just one obstacle; some males - known as "sensors" - have the ability to detect that they are not normal human women. Thus, the sisters agree that they must be eliminated before the hundreds of remaining Theogkoorian witches can join them.

The lead sister, Sharkana, poses as a magician at a theater in Washington D.C. However, inside of the women's restroom of said theater, is a trap door that sends women down into the depths of Hell. There, the other two Theogkoorians torture her and threaten that her agony will go on for an eternity unless she kills one of the men that they have targeted as a "sensor". The odd behavior of one of these women, the protagonist Beryl, catches the attention of her boyfriend Jason. After witnessing his girlfriend attempt to kill a zookeeper, he investigates the theater and ends up falling into Hell himself. Jason is able to overpower the three villainesses, killing one via impalement, the seconds with a crushed skull, and lastly, Sharkana, who is thrown into Hell's flames. 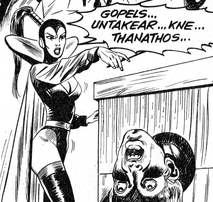 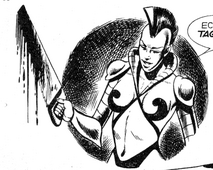 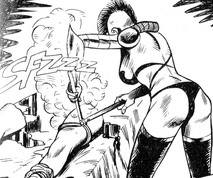 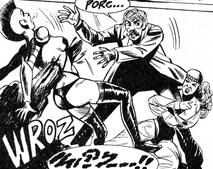 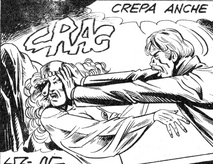 Retrieved from "https://femalevillains.fandom.com/wiki/The_Theogkoorians_(Storie_Viola)?oldid=197594"
Community content is available under CC-BY-SA unless otherwise noted.