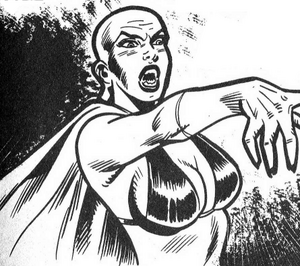 The sorceress is one of many evil witches who once lived on the planet Elmauss, four millennia ago. Their arch nemesis were the Zenqs; an alien race resembling seventeenth-century Puritans who were known as "Exterminators of Witches". When the Zenqs finally succeeded in destroying Elmauss, each of the witches were blown in different directions through space. One of them made Earth her new home, and was able to slip herself into human society without issue. However, in the year 1964, one of the Zenqs managed to track her down.

Being linked in both body and mind had made the witches physically indestructible, and so the Zenqs found a way to separate them from their bodies. The Earth witch was transferred into the body of an unborn fetus, who would be born as the story's protagonist Hilary Boylds, and would remain completely trapped there. This appeared to be a perfect solution for the Zenqs; however, one possibility that they hadn't taken into account was that the creature that they relegated the witches to could also be evil.

When Hillary reached twenty-two years of age, she murdered both her boyfriend and his newest fling, angered that she would not get access to his wealth. This presented the Elmaussian with a grand opportunity. She begins causing Hillary nightmares sourced by visions of the sorceress's own memories from when she performed human sacrifices. This eventually drives Hillary to seek help from an exorcist, but once the process in completed, the sorceress materializes back outside of Hillary's body. She then kills the exorcist and takes Hilary to a planet "that humans know as Hell" and adds the former host to her many sacrifices. 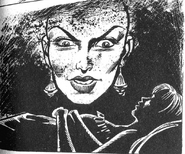 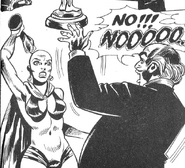 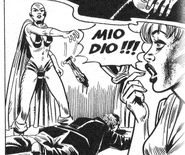 Retrieved from "https://femalevillains.fandom.com/wiki/The_Sorceress_of_Elmauss_(Storie_Viola)?oldid=194691"
Community content is available under CC-BY-SA unless otherwise noted.