The Silver Fox, also referred to as The Lady in Black (Jun Karasawa) is a villainess from "the Girl from the Black Organization and the University Professor Murder Case", episode 5.23 of Case Closed (airdate January 4, 1999). She was the leader of an elusive counterfeiting ring, and was additionally the group's sole female member.

While at an art gallery, the Silver Fox noticed a portrait of Natsume Sōseki, a Japanese novelist who was present on ¥1000 bills. With that in mind, the evil Silver Fox had her accomplices kidnap the portrait's artist (a high school student) and held him captive at their hideout, where they began forcing him to make counterfeit money from them.

Toshiya Nakada, the teen's younger brother, became worried after his brother's disappearance and contacted Conan Edogawa and his friends, who were part of their own "detective agency". Eventually, Conan's deductions (as well as the group following one of the Silver Fox's henchmen after he used a counterfeit bill at a convenience store) led them to realize that the Silver Fox (who had approached Toshiya's brother before having him kidnapped) was part of a counterfeiting ring and was using Toshiya's brother in their greedy endeavors.

As the group (which also included Ai Haibara, a new student at Teitan Elementary) tracked down the gang's hideout to a newspaper factory near the police station, The Silver Fox lambasted her henchmen for using an unconvincing counterfeit in public. When one of her henchmen spotted the children inside the factory, the mastermind went with her cohorts to eliminate them, with one of her henchmen cornering Conan as he came to save his friends. Meanwhile, the Silver Fox and her villainous crew cornered the children and she prepared to kill them all in order to make her hostage work faster. When she prepared to shoot Ayumi Yoshida and she cried out for Conan, the callous villainess boasted that she'd had her henchman kill Conan before preparing to kill the young girl.

But at that moment, Conan burst into the room and disarmed the Silver Fox, revealing that he had subdued his would-be killer and that she'd been driven to kidnap her victim to replace the man who usually drew her counterfeits after he broke his arm. When Conan subdued her other cohorts, the Silver Fox tried to grab her gun, only for Ai to grab it before her and fire a warning shot through the window, startling the mastermind. The villainess was later arrested and identified by inspector Juzo Megure, revealing that Conan had been wrong in thinking that the Silver Fox worked for the Black Organization responsible for drugging him back to child form. 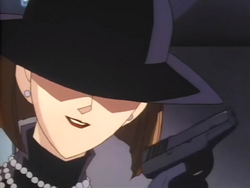 The Silver Fox's evil smirk as she brandishes her pistol 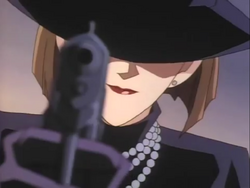 The Silver Fox as she prepares to kill Ayumi
Add a photo to this gallery
Retrieved from "https://femalevillains.fandom.com/wiki/The_Silver_Fox_(Case_Closed)?oldid=171934"
Community content is available under CC-BY-SA unless otherwise noted.