Start a Wiki
watch 01:48
The Loop (TV)
Do you like this video?
The Poodle Lady (Anna Katarina) was a minor antagonist in the 1992 film, "Batman Returns". She was a thug who worked for The Penguin (Danny DeVito), as a member of the Red Triangle Circus Gang. She had long, curly blond hair with a pink bow and always wore a matching pink dress and coat. She is the only member of the gang mentioned by name in the movie's dialogue.

She was first seen in the assault of Gotham City.  She had a trained poodle (also with a bow in its hair) that was trained to carry out criminal acts for her and guarded her fiercely.  She at first sent him out to blow up a store with a grenade that it carried.

The Poodle Lady was later seen with three other clowns.  Batman (Michael Keaton) tried to knock them all out with his Remote Control Batarang, but the Poodle Lady's Poodle caught it right before she was hit.  The Poodle Lady then escaped with her poodle and the Batarang.

Later the Poodle Lady and the Penguin were seen entering the dressing room tent of the Ice Princess (Cristi Conaway) as she was getting ready to light the Christmas Tree for Gotham City.  The Ice Princess thought the Penguin was there as a talent scout, and she posed for what she thought was a photo shoot.  However, the Penguin took the Batarang out of the mouth of the poodle and used it to knock out the Ice Princess.  That way, it would incriminate Batman with the crime.  They then kidnapped the Ice Princess and tied her up in a chair as bait for Batman. The Poodle Lady then helped the remaining members of the Red Triangle Gang to sabotage the Batmobile.  She then updated the Penguin on the status of his army of rocket-wielding penguins in her deadpan voice as they approached Gotham Plaza.

The Poodle Lady's personality is marked by sternness and determination. She never smiles, and always remains confident no matter how dangerous the situation. She also almost never speaks, breaking her silence only during the movie's climax. Her family background is uncertain, but those few times she is heard speaking her voice sounds like it could be Eastern or Central European.

Apparently second only to the Organ Grinder (Vincent Schiavelli) within the gang's hierarchy, the Poodle Lady is one of the most intelligent and competent of the Penguin's followers. While she does not appear to possess any fighting skills, her animal-training abilities serve her very well. And in addition to her talents at setting bombs and sabotaging cars (the Batmobile in this case), she also is proficient in electronics and computer technology. The Penguin assigned her to the task of manning his missile-command center and launching the penguin-mounted rockets into Gotham Plaza. She failed at this task only because Batman was able to find the frequency of her launch signal and directed his butler, Alfred (Michael Gough), to counteract it with a frequency jammer in the Batcave.

The Poodle Lady is almost certainly middle-aged, because she was a part of the Red Triangle Circus when the Penguin (who is 33 years old) was exhibited there as a child.

The Poodle Lady was last seen disappearing into the shadows after the Penguin's plan to destory Gotham failed.  It is inconclusive as to her fate, but she was probably arrested after Penguin died in the ensuing battle with Batman. 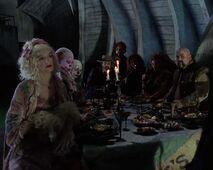 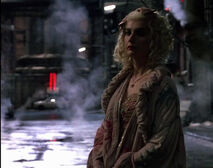 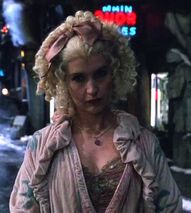 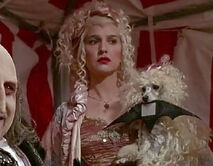 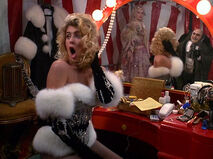 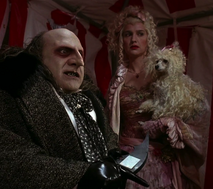 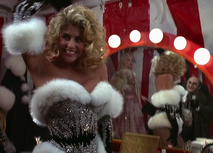 Add a photo to this gallery
Retrieved from "https://femalevillains.fandom.com/wiki/The_Poodle_Lady_(Batman_Returns)?oldid=80869"
Community content is available under CC-BY-SA unless otherwise noted.