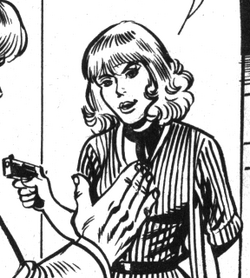 The Oktoharian, as her name would imply, comes from the planet Oktohar. Part of a family mining company, she learns that within the bowels of Earth are rare minerals of inestimable value. Because the laws of world forbid the exploitation of civilized planets, she decides the best course of action is to travel to Earth herself, litter the ground with hidden mines, and blow up the celestial body so that she can then reap all of the treasures for herself. What she did not count on, however, was that her law abiding family would be sending ten robots to Earth after her, in order to thwart this plan.

Knowing that the robots could identify her if she sought them out herself, the Oktoharian finds a down-on-his-luck man named Fulke Overton to aid her. She first abducts an altruistic woman after pretending to be a mugging victim, and then pays Fulke $2,000 to rape her, which he does reluctantly. After he leaves, however, the Oktoharian brutally slaughters the girl and informs Fulke the following day that she plans to frame him for the murder if he doesn't do what she says.

The Oktoharian soon tells him about the robots and twists the truth around by saying that it is her family members who are the evil ones and that she is the righteous do-gooder who wishes to save the Earth. Fulke believes her when, beneath the skin of the second abducted girl, he finds a robotic skeleton, and agrees to help. However, when the alien falsely identifies the seventh robot, he again becomes suspicious of his employer's "good intentions" when she viciously murders the human.

When the seventh robot is brought back to the hideout, Fulke gets the Oktoharian to confess everything after mentioning that the robot told him a different story. Desiring to get revenge for having been blackmailed, the deaths of the two "Earthling women" and wanting to blow up his planet, Fulke - with the assistance of the now-freed seventh robot - kills the deceptive alien by ripping the flesh from her body.

Retrieved from "https://femalevillains.fandom.com/wiki/The_Oktoharian_(Storie_Blu_Special)?oldid=196151"
Community content is available under CC-BY-SA unless otherwise noted.