Start a Wiki
watch 01:38
The Loop (TV)
Do you like this video?
The Henchmaid (Heather Bonomo) is a minor antagonist in the 2013 episode "Operation: Red Herring" for the action comedy web series "The Adventures of Superseven".

Sandra West (Olivia Dunkley) has just woken up after Superseven (Jerry Kokich) successfully removed the mind control chip in her head.  They are located in the apartment of Sparky (Anne Leighton).

Just as they are about to kiss, they are interrupted by a "Freeze!" coming from the doorway.  Looking up there is a lovely blonde dressed in a French Maid outfit holding a semi-automatic rifle.  The outfit includes a one-piece black satin skirt dress, with white ruffles around the bottom of the skirt and top of the blouse.  She has a white apron around her waist and a black one-inch thick velvet choker around her neck.  She is wearing orange high heels, and black fishnet stockings that accentuate her lovely legs.

Sandra sarcastically said, "Oh look, another French Maid".  The Henchmaid demanded, "Don't anyone move", and tossed her hair.    The camera paned up the lovely lines of the assassin, and then back down to her orange stilettos.  Having noticed the same thing, Sandra said, "With pretty shoes".  By this time, it was more than obvious that Sandra has a thing for nice high heels, having often confiscated the stilettos off of her victims.

Unfortunately, we are left wondering about the fate of this lovely assassin, since the episode ends with Superseven and Miss West turning and looking at the camera.  We are also left not knowing whether this French Maid is related to Fifi LeBlanc or Elke Kleinschmidt, the two assassins that appeared in two previous episodes. 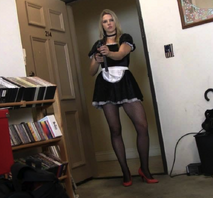 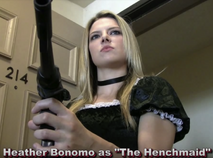 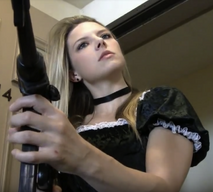 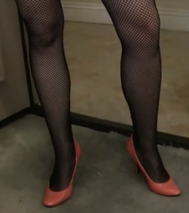 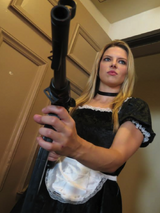 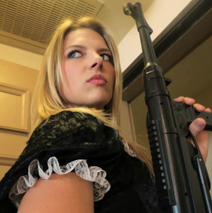 Add a photo to this gallery
Retrieved from "https://femalevillains.fandom.com/wiki/The_Henchmaid_(The_Adventures_of_Superseven)?oldid=150196"
Community content is available under CC-BY-SA unless otherwise noted.