The harpies attack the jungle and kidnap men with the intention of eating them. They are lead by their queen, Masta.

Rulah escapes from her prison just as the harpies are about to feast on a man, she attacks them and kills Queen Masta with her knife, she cuts off the queen's wings and threatens the remaining harpies with a similar fate if they don't stop eating men and start obeying her. They kneel in submission and obey. 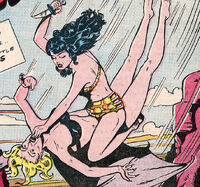 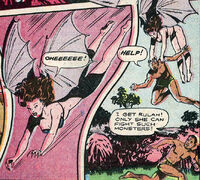 One of the harpies kidnaps a man to feast on

Queen Masta intends to toy with Rulah, before killing her

Rulah strangles a guard and escapes 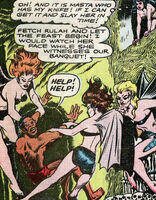 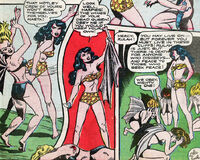 Rulah slays Queen Masta and the harpies submit
Add a photo to this gallery
Retrieved from "https://femalevillains.fandom.com/wiki/The_Harpies_From_Hades_(Rulah,_Jungle_Goddess)?oldid=160750"
Community content is available under CC-BY-SA unless otherwise noted.