"The Flower Children" is the somewhat inappropriate label given to a large gang of henchwomen to the arch villainess Poison Ivy in the (unrelated to the main plot) initial sequence of the episode The mask of Matches Malone of the animated TV series Batman: the brave and the bold (USA 2008 - 2011). The episode was first broadcast on January the 7th 2011.

Poison Ivy kidnaps Batman and threatens to kill him unless he agrees to join her as "King" to her self declared crime "Queen" of Gotham City. When Batman refuses, Ivy's henchwomen take him to be eaten by the "herbaceous hussy's" monster man eating plant. But Batman escapes, destroying the plant. Heroine the Black Orchid appears, she has been disguised as one of Ivy's gang; she goes into battle against Ivy and her female thugs.

Appearance - All wear green leotard type uniforms. Unlike Poison Ivy's own outfit, which is shiny, their leotards appear to be made of normal spandex. They also wear leaf-like gloves and shoes, with leaf decorations in their hair. The gang are unnamed, but individually differentiated females in their 20s/30s, having varying hair styles and slightly different features (their faces tending to look rather predatory/mean) - all are Caucasian, apart from one who is black.

Weapons - Some carry spears, others have guns which don't shoot bullets, but some sort of plant like substance which twists round an opponent's body, trapping them.

Fate - Despite seemingly overwhelming odds in their favor, the skilful Black Orchid soon makes short work of the henchwomen and Ivy. Some of Ivy's gang are knocked down and out by the Orchid's kicks and punches; two with the guns become ensnared by "friendly fire" when shots aimed at Black Orchid hit them instead, trapping them in plant tendrils. It is unknown if they managed to escape from it.

Presumably Ivy and her gang are arrested after their defeat, but this is not shown. 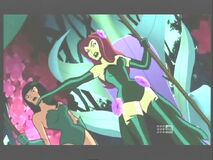 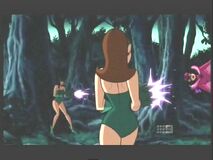 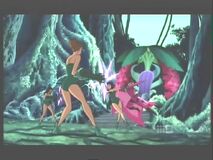 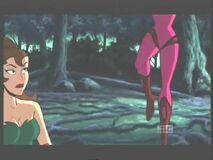 Black Orchid drops in on a Poison Ivy henchwoman

Add a photo to this gallery
Retrieved from "https://femalevillains.fandom.com/wiki/The_Flower_Children_(Batman:_The_Brave_And_The_Bold)?oldid=200692"
Community content is available under CC-BY-SA unless otherwise noted.