Start a Wiki
watch 01:21
The Loop (TV)
Do you like this video?
The Evil Enchantress (played by Rose McGowan) was an evil witch who appeared in the 1999 episode "A Knight to Remember" (Season 4 Ep. 6), for the TV series Charmed.

The Evil Enchantress came into powers in the 12th century and came about her powers of moving objects with her mind. In addition, she could conjure air and electricity. She was also skilled at potion making. She chose to use her magic for evil and adopted the title of "The Evil Enchantress".

She became obsessed with a Prince, who was about to marry a beautiful maiden named Lady Julia. She wanted the Prince for herself in order for her to rule the entire kingdom. She began to plot and plan. When the stars were aligned in the shape of a prince with a sword, the Enchantress told her men to bring Lady Julia to her. The Enchantress proceeded to lock her behind bars while she concocted a dark potion to appropriate the Prince's love for Julia to herself.

After the potion was complete, the Prince arrived at the castle and ordered her to release Julia.  She then used the potion on him, combined with a spell to make him fall in love with her.  The dark magic was successful, and they proceeded to attempt to conceive an heir.

However, just as they were about to consummate their relationship, the Prince was transported away. Enraged, the Enchantress proceeded to use a lock of Julia's hair in a potion to follow his footsteps and bring him back. She then created a portal which transported her to the attic of the Halliwell Manor in the year 2001, right in front of Piper and Phoebe Halliwell. She demanded to know where the Prince was, but they did not answer and ran around the house while the Enchantress shot electricity at them. Eventually, she realised that they did not have the Prince, and left.

Following her heart's pull, the Enchantress journeyed to South Bay Social Services, where Bob Cowan mistook her for Paige Matthews. She then found a picture of her, and saw immediately that she was her future-life. She was initially gratified, believing that her evil had carried on through the centuries. She found Paige in a street near her apartment. Paige tried to drive away in her car, but the Enchantress used her powers over wind to stop her from moving, and causing a tire to burst. The Enchantress was not at all pleased to find out Paige was good. Paige then threw a potion at her, which she destroyed with her electrokinesis before knocking Paige out with her aerokinesis.

The Enchantress then entered Paige's apartment, where she saw Piper and Phoebe with the Prince. After using her powers to incapacitate the sisters, she made another portal and left with the Prince. The sisters then followed, jumping in the portal after them, but the Enchantress had her guards chain them to a wall while she and the Prince went to her bedroom.

However, before the Enchantress and the Prince could have sex, Paige arrived and channeled the Enchantress's powers against her. A brief battle ensued in the chamber, ending only when Paige used aerokinesis to knock her on the floor before binding her powers using a potion. Lady Julia and the Prince then kissed, breaking the spell.

It is unknown what happened to the Enchantress later. She was presumably imprisoned or, at the very least, punished for her crimes against the kingdom.

At some point after her death, Melinda Warren or a descendant of hers wrote a brief entry on the Enchantress in the family's Book of Shadows. They also included the spell she used on the Prince. 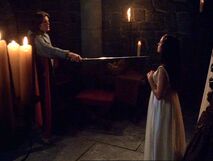 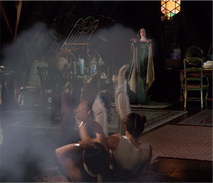 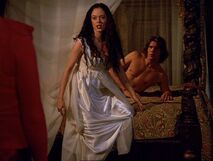 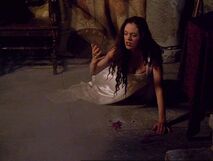 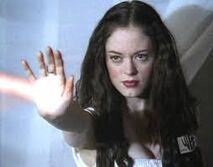 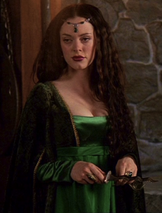 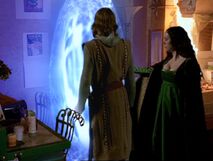 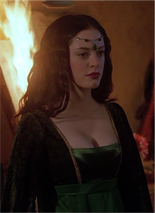 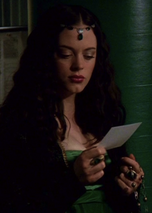 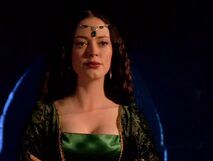 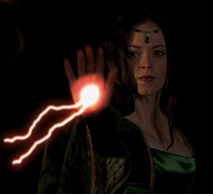 Add a photo to this gallery
Retrieved from "https://femalevillains.fandom.com/wiki/The_Evil_Enchantress_(Charmed)?oldid=197604"
Community content is available under CC-BY-SA unless otherwise noted.