The Devil Ladies are a gang of henchwomen to a male arch villain who are up against Rulah, the white jungle heroine, in a 1940s comic book in Rulah, Jungle Goddess "The Devil Ladies" in Jungle Goddess no 19 (Fox Feature Syndicate October 1948). There is no indication they actually call themselves Devil Ladies, this is simply the title used for the story based on them being evil women in devilish costumes. Their leader is named Lona, whom the heroine defeats early and then impersonates as a ruse.

Peters, the war mongering evil agent for an unnamed foreign power, employs a group of vicious women to carry out his dirty work in Africa. They are disguised to look like devils to frighten the superstitious natives, whom, in raids on their village, they first terrorize and kill, and then kidnap in order to be used in human experiments being conducted in the gang's HQ, based in an abandoned mine. The experiment seems to be to assess the effectiveness of their strange fire-shooting guns.

Peters instructs them to kill Rulah, the jungle heroine, who represents a threat to their plans. Rulah takes on the gang, infiltrating their HQ in disguise as a Devil Lady. Despite being discovered and briefly captured, Rulah, along with a native man, manages to defeat Peters and his henchwomen. The mine is blown up by Peters himself, who switches the destruct mechanism on as he tries to escape (he fails to, he is shot by a flame gun fired by Rulah and falls into a vat of boiling liquid).

Lona, who is the leading Devil Lady, along with another henchwoman, hunt for Rulah. In the course of this hunt, they encounter a tiger. Lona's flame gun accidentally discharges, killing the other Devil Lady. Rulah jumps down from a tree and knocks out Lona. Rulah then swaps her clothes with Lona to infiltrate the gang's base in her identity. Believing Lona is a captured Rulah, Peters executes his hapless, trussed up henchwoman by tossing her into a vat of boiling liquid.

After Rulah is captured, a native, following her earlier instructions, arrives at the mine, having somehow got hold of a flame gun. He saves Rulah from being shot by the henchwomen at the last second, after which Rulah and her native ally use the Devil Ladies' own guns to kill many of them while the rest seem to die when the base self-destructs before they can escape.

The Devil Ladies are all young white women, dressed alike in most of the story in red catsuit type Devil costumes. They are all armed with weapons which resemble rifles, but which shoot flame instead of bullets. The Devil Ladies are unscrupulous and ruthless, completely at ease with killing and kidnapping defenseless people. The extent of their murderous nature can be seen when they fire their flame guns at their native captives to experimentally test the weapons for effectiveness.

Fox Features Syndicate were among the most prurient and violent of the pre-code comic publishers. Those qualities are certainly on display in this story, with the sexy costumes of Rulah and her adversaries, callous mass murdering villains, and some grisly deaths. This is a rare example of Rulah in a story taking on not just one but many female villains and who are not "Amazon" types. 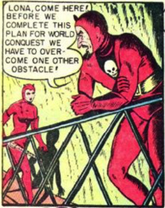 Peters calls the Devil Lady Lona over for instructions 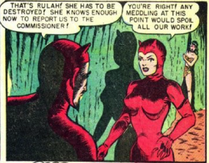 Lona and her Devil Lady companion are attacked by a tiger.

While wrestling with the tiger, Lona's fire gun goes off and kills the other Devil Lady. 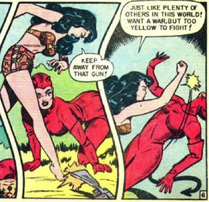 Rulah kicks the fire gun away from Lona and then with a punch to the chin knocks Lona out.

Rulah strips the Devil outfit off of Lona and replaces it with her own jungle outfit. 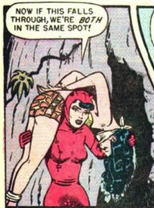 She packs Lona back to the lair. 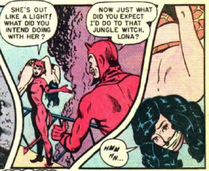 Rulah arrives in the lair with Lona and asks Peters what he wants to do with her body.

Rulah finally remembers that Lona is an evil girl, and its better destroying her than her own people.

Rulah dressed as Devil Lady Lona is given instructions from Peters. 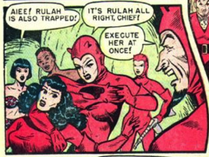 The other Devil Ladies uncover Rulah dressed as the now deceased Lona. 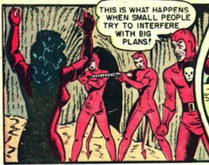 The Devil Ladies take aim at Rulah with their fire guns. 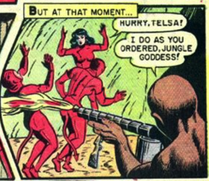 Rulah's buddy Telsa comes to her rescue and kills the Devil Ladies.

The evil Peters meets the same death at Lona as he is flung into the boiling water.
Add a photo to this gallery
Retrieved from "https://femalevillains.fandom.com/wiki/The_Devil_Ladies_(Rulah,_Jungle_Goddess)?oldid=210992"
Community content is available under CC-BY-SA unless otherwise noted.