Start a Wiki
watch 01:21
The Loop (TV)
Do you like this video?
The Countess  (Lauren Hutton) is the main antagonist in the 1985 horror comedy film Once Bitten.

The Countess is a 4 century year old vampire with a curse. Her curse is that she must seduce and bite a virgin three times before halloween. If not, she will show her true age.

The Countess sends her minions into the city to look for a virgin. They begin searching the city, looking high and low until they come across a high school nerd named Mark Kendall (Jim Carrey) who is looking for a woman to score so he can lose his virginity. They leave to inform their mistress.

The Countess meets Mark at a singles bar and takes him back to her mansion where she seduces him. After he passes out she bites Mark's thigh and takes his blood.  When he wakes up she pretends they had sex, and tells him that he is now hers. Mark begins to show strange behavior, has strange dreams, avoids sunlight, and even drinks blood from raw meat.

The countess then begins stalking Mark, and appearing in his dreams. After the Countess gets a second bite, Robin Pierce (Karen Kopins) notices Mark's odd behavior and cofronts the Countess during a dance-off at the high school's Halloween dance.

Robin appears to win Mark back, but that is only temporary.  The Countess kidnaps Robin to lure Mark to her mansion for a final bite before her deadline expires.  Eventually, to save Mark from the Countess's clutches, Robin and Mark have sex in a coffin while being chased by the Countess's minions.  Thereby, Mark's viginity is gone, and he is returned to normal.

The defeated Countess begins to grow old and decrepit before their eyes.  The Countess' assistant, Sebastian (Cleavon Little), tells her not to worry as there are other virgins in the world despite the fact that the Countess doubts she will find another virgin.  The movie ends with Mark and Robin continuing to have sex in the coffin. 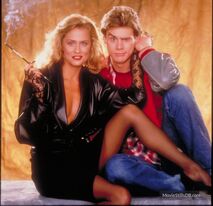 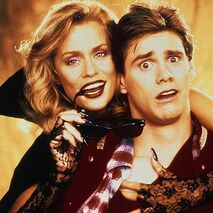 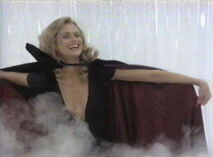 Retrieved from "https://femalevillains.fandom.com/wiki/The_Countess_(Once_Bitten)?oldid=184010"
Community content is available under CC-BY-SA unless otherwise noted.