Start a Wiki
watch 01:50
The Loop (TV)
Do you like this video?
The Colonel (Lena Olin) is the main antagonist in the 2020 TV series "Hunters", which appeared on Amazon Prime Video.

The series takes place in 1977 New York City, where a young Jewish man bent on revenge is taken in by a secret group of Nazi hunters fighting a clandestine war against the cabal of high-ranking Nazi officials.

It is soon learned at the end of the first episode, that the leader of the Nazi underground group is ruled by The Colonel.  Her goal is to create the Fourth Reich in America, while living in Argentina.

She is the leader of a food conglomorate known as Schidler Corp. They have developed a biological weapon in the form of a virus pathogen.  They plan to put this pathogen into a new substance known as corn syrup, which is the next sweetener to replace sugar.  They intend to introduce this corn syrup into food and beverages.

In order to do this, they cause a diversion by blowing up a subway near Grand Central Station, and a power plan.  As a result it causes a blackout in New York.  As a result tons of looting take place causing chaos.  They then are able to get the pathogen off of the ships in the harbor and bring it by trucks to the Schidler Corp. plant located in New Jersey.  It is here that they added the pathogen to the corn syrup.  However, the hunters team was able to sabotage the plant and end the distribution.

Towards the end of the first year of the series, The Colonel makes her getaway from the plant.  Her driver ends up being the Nazi hunters leader Meyer Offerman (Al Pacino).  She shoots Meyer, and the two of them crash off a bridge into the river.  As Meyer is rescued by Sister Harriet (Kate Mulvany), it appears that The Colonel is killed.

It is then learned that Meyer is actually the aged Wilhelm Zuchs, known as The Wolf.  Zuchs was a Nazi docter at Auschwitz, who tormented the Jews.  Zuchs then killed the real Meyer and took his identity to escape the Soviets.

However, the last episode, The Colonel appears very much alive.  It is also revealed that she is in fact Eva Braun, the real life wife of Adolf Hitler.  Hitler then comes in and sits at the head of the dinner table, aged but also very much still alive. 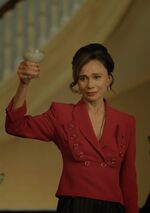 Add a photo to this gallery
Retrieved from "https://femalevillains.fandom.com/wiki/The_Colonel_(Hunters)?oldid=196093"
Community content is available under CC-BY-SA unless otherwise noted.