The Female Villains Wiki
Register
Don't have an account?
Sign In
in: 1960s, Attempted Murder, Blonde,
and 16 more

The Batman syndicated newspaper strip in which this story appeared ran from 1966 to 1972. It began in May 1966, a few months after the debut of the (initially) highly succesful TV series which was seen on the ABC network from 1966 until 1968.

Using the Batcomputer, the caped crusader discovers the identity of the thief who has purloined the violin, a connoisseur crook who calls himself "The  Collector." Jack accompanies Batman and Robin in the Batmobile to go after the Collector. Heading for the crook's hideout, the trio are waylaid by a group of the Collector's thugs, but the trio defeat them in a fight.

Arriving at the building where the Collector has his headquarters, Jack, Batman and Robin use the Batrope to climb up to towards the crook's apartment. But they've been spotted - inside the apartment one of the Collector's henchwomen runs in to warn him that Batman and co are approaching. The portly villain dashes onto the balcony accompanied by his blonde bad girl. He tells her to cut the rope, which the female crook attempts to do using a large knife - but the Batrope is made of strong material and the woman's knife shatters when she tries to slice it. The Collector then primes and conceals a compressed air gun, which, when it catches intruders in its light beam, will fire out a spray of poison darts. Smugly smirking, the pair return inside.

However, as Batman reaches the balcony, he suspects some sort of trap will have been rigged for them. He shoots the Batarang, which contacts with the weapon's light beam - the poisoned darts shoot out, but harmlessly hit the Batarang, instead of our heroes.

Discovering his deadly weapon has failed, the Collector barks angrily at his 2 henchwomen, blaming them for what has happened. He orders them out of the room until he calls for them. Jack, Batman and Robin enter the room as the Collector smashes a violin, pretending it's Benny's Stradivarius. Batman tells a horrified Jack that the Collector has really just destroyed a fake and is trying to fool them.

The Collector then sets a pair of gorillas (!) on the trio, and the large beasts attack. However, the heroes discover the apes are ticklish (!) and use this to thwart the assault; while the 2 animals helplessly roll around the floor, Batman feeds them tranquilizer pellets.

The Collector now holds Jack, Batman and Robin at gunpoint. Then his 2 henchwomen, wearing conceited grins, appear suddenly at his side, pointing revolvers. The Collector tells Batman he knew the dynamic duo would never fight women. Robin pipes up, saying that Jack Benny isn't bound by that rule; Jack protests,saying he's "just as chivalrous" as they are. But Robin has simply being making a distraction - distracting the criminals while Batman operates the powerful magnet on his utility belt. The magnet acts on the henchwomen's metal guns and the stunned villainesses are yanked through the air, screeching, smashing head first into Batman himself, falling to the ground, knocked out. The corpulent Collector's weight has saved him from a similar fate as his gunwomen. However, Batman soon disarms the arch crook and knocks him down with a face punch. Jack Benny's  precious Stradivarius is retrieved, the Collector and his female goons are all washed up.

Appearance -  Slim, good looking Caucasian women, one with shoulder length blonde hair, the other with dark wavy, short hair. Probably in their 20s. They are dressed in white shirts and tight black slacks. They have cowboy type boots and bullet carrying gunbelts for their weapons. They look like glamorous cow-girls - minus the hats.

Weapons - Revolver hanguns. One gungirl has a knife as well.

Fate - After they're knocked out and lying on the floor, Batman tells Robin to "Tie up our sleeping beauties." We can take it for granted that they are arrested along with their boss. 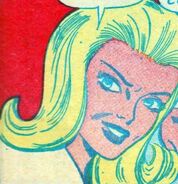 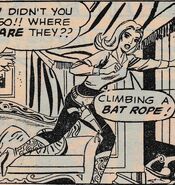 The Collector's blonde henchwoman fails to cut the rope 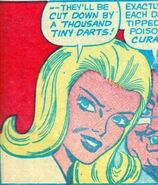 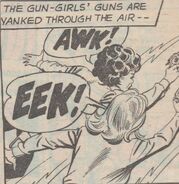 The Collector's henchwomen - yanked into the air 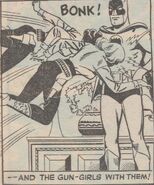 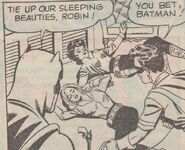 ThE Collector's henchwomen - finished
Community content is available under CC-BY-SA unless otherwise noted.