Start a Wiki
watch 04:10
The Loop (TV)
Do you like this video?
The Blonde (Janis Hansen) is a minor antagonist in the 1968 episode “To Steal a Battleship” for the TV series “It Takes a Thief”.

This rivalry begins when The Blonde meets Mundy outside the Paris airport and greats him with a giant kiss. She then tells him that a man wearing sunglasses in a phone booth (George Palmer) has a pistol on him.  With the threat of shooting him, she forces him to go back in the terminal and get on a plane bound for Geneva.  Mundy was able to escape off the plane and report back to his boss Noah Bain (Malachi Throne), and let him know of his attempted kidnapping.

Mundy is told his assignment, that a diplomat named Bjornsen (Maurice Marsac) is suspected of having stolen NATO documents that he intends to sell to the highest bidder.  The mission of Alexander Mundy (Robert Wagner) is to pose as a photographer, infiltrate the diplomat’s villa, and recover the documents.  Mundy finds that he will be working with Irena Damos (Linda Marsh).

However, Mundy has some competition in world-class thief George Palmer (Bill Bixby) and his lover accomplice, The Blonde.  Mundy and George have been rivals for years, having gone after the same high priced items.  George has been casing the villa and intends to steal a very valuable necklace.

Mundy finds out that George is staying at the same hotel as he is, and after spotting The Blonde at the pool approaches her.  He threatens to push her in the pool, knowing that she is wearing a paper bathing suit if she doesn’t tell him where her boyfriend is.  The Blonde took her to George, who held a pistol under a towel on Mundy, and told him that he sent him on the plane so that he could have squatters rights to the Bjornsen necklace.  Without giving George his true intention, he tries to negotiate a merger so the two can work together, but he refuses.

Mundy has George arrested on fake charges so that he can case his hotel room for a possible map to the Bjornsen safe.  While doing this, The Blonde is taking a shower.  When she comes out, Mundy surprises her with a kiss, and leaves with the map, before she can deduce that it was not George who kissed her.

Returning later to his hotel room, Mundy is greeted with the lovely Blonde who is lying on his bed in a green lounge dress.  George comes out of the shadows pointing a gun at him, and demands the house plans back. The two engage in a fistfight that takes them all over the hotel room.  While the fight is going on, The Blonde enjoys the show, munching an apple like popcorn in a movie theater.  Mundy has the upper hand, and as a result, George agrees to help him infiltrate the mansion and split the bounty with him.

The next morning as George and Mundy are talking about merging more than this job, and possibly becoming partners, The Blonde rushed up and gave Mundy a kiss.  George took the distraction as a chance to knock Mundy out with a blow to the head.  The two then transported Mundy in a car and dumped his body in some bushes in the woods, leaving him tied up and gagged.

Once inside the party, Mundy spotted The Blonde and told her if he didn’t tell him where George was, he would blow the whole show.  He continued, “That beautiful blonde hair will grow awfully dark when you’re thrown into a dungeon, and prison food will wipe those curves right out”.

Mundy set the alarm off to create a diversion, disrupt George from opening the safe, and locate the safe all at the same time.  Mundy then made his way up to the room with the safe, and knocked out Bjornsen’s henchman.  He then stole the necklace and the plans, which were inside an Egyptian battleship model which he opened with an oar that was also inside the safe.

When Mundy made it down from the balcony, George took the necklace by threatening to shoot him. However, Mundy gave up George’s position as he was trying to get away, and it appeared that he would be apprehended.

The next day, Mundy was standing in line at the terminal, and George had The Blonde go greet him.  As she kissed him and the two embraced, The Blonde reached into his pocket and took his boarding pass.  While continuing with the kiss, she handed it to George, who then cut in line ahead of Mundy.  George told him that he had to throw the jewels back over the wall to avoid getting caught by the dogs, and then had to stiff the hotel, since he had no money to pay.

George used the boarding pass to get away, and The Blonde turned to Mundy and told her that she was able to steal his pass and give it to George.  Mundy told her he knew it, and allowed her to take it.  When the Blonde asked why, Mundy revealed, “I wanted George to get on that airplane.  We’re a partnership, and partner’s share all assets…..understand?”  He then kissed her, and the two walked out of the terminal together. 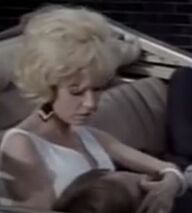 Add a photo to this gallery
​​​​​
Retrieved from "https://femalevillains.fandom.com/wiki/The_Blonde_(It_Takes_a_Thief)?oldid=190336"
Community content is available under CC-BY-SA unless otherwise noted.