The Female Villains Wiki
Register
Don't have an account?
Sign In
in: 1960s, Business Villainess, Callous,
and 18 more

The Art Inc Receptionist (The Avengers)

The girl from Auntie First broadcast in the UK on the ITV network on June 6 1966.

Emma Peel has been kidnapped and replaced by an innocent imposter. John Steed investigates the sinister organization which has its legitimate front as "Art Incorporated" - a cover for a vicious criminal gang headed by Gregorio Auntie, specialists in "acquiring" (ie stealing) anything at all ("the unobtainable obtained" is their motto) for anyone - as long as a buyer is willing to pay enough for it. It's Auntie who has kidnapped Emma, she's very valuable as someone who knows many secrets useful to enemy powers. Auntie puts her up for sale to the highest bidder. But Steed, infiltrating Art Inc undercover as a potential Mrs Peel buyer, thwarts Auntie, destroying his evil organization.

She is white woman in her late 20s with short wavy hair. She's beautiful, but her sharp features give her a somewhat malevolent appearance. She has a rather harsh voice with an upper class diction. She wears 2 different tight mid length skirts in the episode.

She's an example of the sort of very ruthless, cold blooded, and incorrigible female villains the series could present on occasion. She's clearly an efficient organizer of Art Inc's criminal business. Her complete lack of scruple is shown when she directs the killing of those who are inconvenient/a threat to the organization, and she seems to get some satisfaction out of doing it. She's cowardly, a trait displayed in her last scene with Emma.

She is seen holding a gun, but she never uses it to shoot or threaten in the episode. When guarding the caged Emma, she carries a whip.

Role in the story -

She has a desk at the reception area of Art Inc. She initially deals with any clients who come into the office. She assists Auntie in the practical arrangements concerning criminally acquiring valuables for sale to clients. She's also seen ordering murders. Along with a male thug, she guards Emma during the auctioning of Mrs Peel.

When Steed breaks into the cellar where Emma is being held in a cage, he takes on the male guard. Meanwhile, Mrs Peel glares at the receptionist and begins to move in a threatening way towards her. This seems to unnerve the cowardly receptionist, who begins to panic and flails at the cage with her whip. This gives Emma the chance to grab the receptionist's arm - Emma pulls the mortified villainess towards the cage, bending a bar with one hand - with the other she forces the receptionist's head between the bars. She then bends the bar back again trapping the evil henchwoman. Emma then reaches for the cage keys on the ensnared receptionist's belt.  Defeated, her head trapped humiliatingly in the cage bars, the receptionist is now a prisoner.

The title of this episode is obviously a play on the name of the then popular US tv show The man from UNCLE.

Though an important secondary villain, the receptionist is never named. Stranger still, she does not appear in the character/cast list on the original broadcast episode. There's no credit for Yolande Turner.

Despite her lack of any credit in this episode, Yolande Turner would return, playing the main villain this time - Miss Pegram - in the Avengers Season 5 episode The £50,000 breakfast . Once again, her villainess would  be defeated by Emma Peel. At least this time Yolande had a named character and was given a credit! An unseen Yolande Turner also provided the voice for the mastermind ventriloquist's puppet in another Season 4 episode "How to succeed...at murder".

The Avengers did serve up a good number of female villains over its run - which took in most of the 1960s - however, the duo played by Yolande Turner were among the most evil and incorrigible. Although her Receptionist is a lesser role than Miss Pegram in The £50,000 breakfast, Turner uses her limited screen time here to create a really icy, cruel and sexy villainess in The Girl from Auntie. Turner's voice is a great asset, beautiful diction, commanding expression, all with a definite upper class tone in the voice, give this villainess an impression of her being a spoiled, greedy and ruthless girl from a wealthy and privileged background making a career in crime. In fact, one would think that the Receptionist, rather than Auntie was the REAL head of Art Incorporated going on the two performances here. The series was certainly dipping into kinky areas in episodes like this - with Turner showing off her her legs posing with a gun, Emma locked in a bird cage, guarded by a whip toting woman, and a final conflict between the heroine and villainess involving trapping the bad girl between bars. Turner's Miss Pegram may have been a full on lead villainess, not a (nominal at least) subordinate like the Receptionist, and a much more feisty fighter when it came to her showdown with Emma, but, as a fan of cowardly villainesses of not much use in a fair fight, and for a number of other reasons, I do favor Turner's earlier black and white bad girl more! 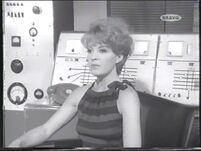 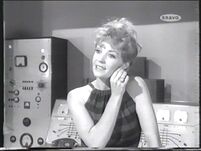 "The false Mrs Peel will have to be eliminated!" - the receptionist (Yolande Turner) 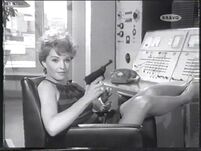 The receptionist and gun (Yolande Turner) 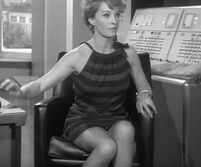 The EB gives us a breeze of upskirt!!! 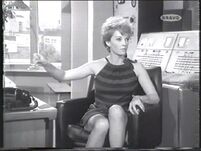 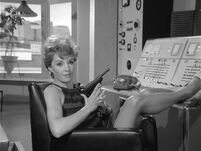 The receptionist and Auntie (Yolande Turner with Alfred Burke) 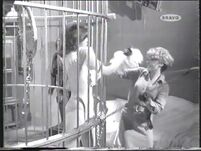 She tries to tame Emma with her whip but fails 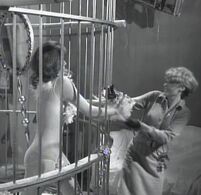 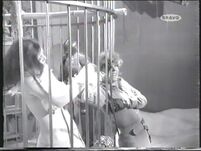 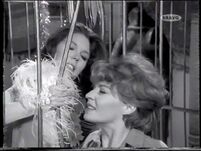 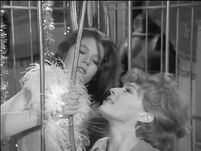 Emma deals with her foe by grabbing her head and...

...yanking it through the bars of the cage 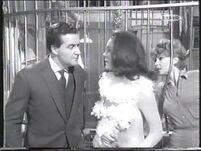 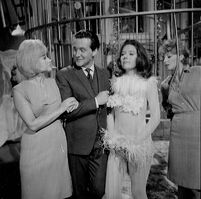 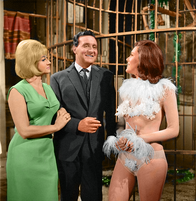 The winner takes it all...!!!
Community content is available under CC-BY-SA unless otherwise noted.