Start a Wiki
watch 01:50
The Loop (TV)
Do you like this video?
Terry Fairchild aka Terry Randell (Daphne Zuniga) was the villainess of the 1984 slasher film The Initiation.

Terry was the deranged sister of Kelly Fairchild (the film's main protagonist, also played by Zuniga), who was institutionalized following an incident in which she stabbed their mother Frances' lover Dwight after catching them in bed together. He was then confronted by Terry and Kelly's father Jason, with the confrontation leading to Jason being severely burned. Kelly also bared witness to the incident, but was left with amnesia afterwards and only had memories of the event via fragmented dreams.

During the movie's beginning, Terry escaped the sanatorium along with several other patients, stabbing Nurse Higgins to death with a gardening fork when she tried to escape the released patients in her car. Terry then returned to her old house to attack and kill Dwight, stabbing him in the neck with the same tool before beheading him with a machete. Afterwards, Terry began targeting her sister, who was now in college and pledging to join the Delta Ro Kai sorority. After learning that the sorority's initiation ceremony would involve stealing the uniform of the night guard at Dwight's department store, Terry went to the department store and stabbed the guard to death before the girls arrived.

The pedges arrive shortly afterwards, with sorority sister Megan and three of her male colleagues (Chad, Ralph, and Andy) coming along to scare the pledges. The evil Terry began her killing spree by killing Andy and Megan, and later killing Chad while he and pledge Alison were going to the bathroom. After Alison found the security guard's body and later Chad's, Alison told Kelly before going to call for help at a security desk, where she was attacked and stabbed to death by Terry. Meanwhile, Kelly saw her name written on the bathroom mirror in Chad's blood, later helping fellow pledge Marcia take refuge in a freight elevator after Terry shot Ralph to death with a harpoon gun while the two were making love. But eventually, Terry attacked the elevator, with Kelly escaping while Marcia was dragged back into the elevator by Terry and stabbed to death. Jason later arrived at the store in an attempt to stop Terry, only to be killed by Kelly out of a belief that he was the one killing her friends.

In the film's climax, Frances and Peter Adams (a graduate assistant in psychology who was helping Kelly with her recurring nightmares) arrived at the store to find Kelly. Peter found who he believed to be Kelly and hugged her in relief, only for her to turn heel and stab him in the back with a knife. The real Kelly then arrived and was shocked to see the girl who had stabbed Peter, this serving as the official reveal that the killer was Terry, Kelly's identical twin. After teasing Kelly about the revelation, Terry chased after Kelly and eventually cornered Kelly upstairs, revealing in the process her jealousy of her sister for "seeing the sights of the world" while she was in the asylum, as well as how she'd been stalking Kelly. After cornering Kelly, the evil Terry sneered at her as she revealed how she'd kill their biological father that she intended for Kelly to be blamed for the massacre and thus allow her to take her identity. Kelly attempted to run, but was tackled and trapped by Terry. But as Terry prepared to kill Kelly, she was shot from behind by Frances, killing her. 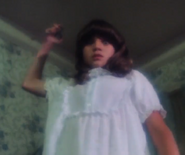 Terry attacking Dwight as a child

Terry's evil smirk during her villainous reveal
Add a photo to this gallery
Retrieved from "https://femalevillains.fandom.com/wiki/Terry_Fairchild_(The_Initiation)?oldid=145385"
Community content is available under CC-BY-SA unless otherwise noted.