Start a Wiki
watch 01:51
The Loop (TV)
Do you like this video?
Terri Pullman (Tijuana Hicks) is the secondary villainess from Elementary episode 4.20:  "Art Imitating Art." She is the wife of Christa Pullman, the villainous district attorney who helped convict Lewis Bowman of the murder of a young girl named Marissa Kagan. As it was later revealed, however, Terri was actually the one who killed Marissa, and Christa helped cover up the crime.

Marissa and Christa were having an affair, as Sherlock and Joan figured out, and after finding out about the affair, the villainous Terri confronted Marissa and later shot her to death. After killing Marissa, Terri spat at her, and with the help of Christa and lab technician Zoe Mercado, Bowman was framed for the crime due to Zoe manipulating the evidence to make it appear that the saliva found on the body belonged to Bowman. When police entered Terri's home looking for Christa, Terri confessed everything; knowing about the affair and killing Marissa. Though not shown on-screen, Terri was (assumingly) arrested. 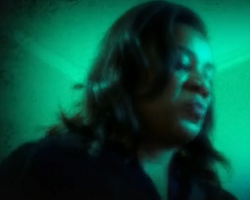 Terri after killing Marissa Kagan
Add a photo to this gallery
Retrieved from "https://femalevillains.fandom.com/wiki/Terri_Pullman_(Elementary)?oldid=169621"
Community content is available under CC-BY-SA unless otherwise noted.