The Female Villains Wiki
Register
Don't have an account?
Sign In
in: 1990s, Betrayer, Blonde,
and 19 more

11 years prior to the episode's events, Terri Garman had dreams of opening a health club with her then-boyfriend (now husband) Mike Holbert. She needed $3 million to do so, but her father refused to give her the money due to his disapproval of Mike. With that, Terri turned heel and devised an evil plot to get the money from her father by masterminding the kidnapping of her own 12-year-old daughter, Erin. She had coffee shop waitress Nora Delano commit the crime itself, along with ensuring that Erin was served healthy food while she was being held hostage in a West Village studio apartment. The villainess' greedy scheme was successful, as her father paid the $3 million ransom, allowing for her and Mike to open the Nirvana Health Club in New York City.

Two days before the episode's events, Terri was encountered by Nora, who demanded money from her in exchange for her silence, which prompted the former to turn heel once again by following the latter to a dock. There, Nora was seen with novelist Dirk Matheson, attempting to get $250,000 from him in exchange for not leaking information about the kidnapping to the tabloids. After Matheson seemingly acquiesced and left, Terri cemented her second heel turn by shooting Nora twice with a gun with a silencer. She then put on the act of a concerned mother in order to hide her true villainous personality.

Terri later learned that her secrets were still in jeopardy of being revealed to the world, as Matheson was writing a novel based on the kidnapping, with Nora having done interviews with him that were recorded on audio cassettes. Knowing this, the villainess visited the novelist at his hotel suite and pretended to be attracted to him before pulling out a gun and demanding that he give her the tapes. Dirk did as he was told, with the evil Terri shooting and killing him before typing a fake suicide note on his typewriter that painted him as Erin's other kidnapper.

Terri's villainous reveal came after Jessica Fletcher caught Mike (the episode's hidden tertiary villain) going to his wife's locker at her behest, which had the clothes Terri wore during Matheson's murder and also the audio tapes, thus uncovering that she wanted him to destroy the incriminating evidence before it was discovered. After claiming she had taken out loans in order to open the Nirvana Health Club—which was quickly proven to be false—the scheming woman confessed to everything, while stating that she had no idea that Erin would be traumatized for years after the kidnapping. Subsequently, she and Mike were arrested offscreen for their crimes.

Terri pointing her gun at Nora 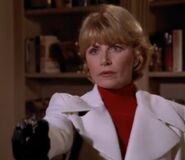 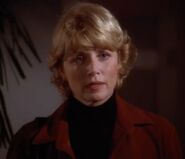