Team Rocket Grunts are the low ranking members of the evil organization Team Rocket from the Pokemon franchise. Team Rocket is under the control of Giovanni. Unfortunately, female grunts didn't appear in the Pokemon games until Gen. II, so they don't make a big appearance in earlier Pokemon media. Despite their lack of appearance, they are still a very villainous group of girls.

Team Rocket is a villainous team that has committed many dastardly and evil plans. They are most well known to use Pokemon as tool, instead of companions, often subjecting them to inhumane experiments. However, due to the, unfortunately limited number of appearances of female grunts, this section will only list the evil crimes committed when a female Rocket Grunt is present. These crimes include:

After these events, Team Rocket, unfortunately, disbanded. In the manga, it is revealed they are still trying to revive their organization. At their last appearance, Giovanni appears to say he is reviving Team Rocket again. Here's hope for more female Rocket grunts to appear in future Pokemon games.

In Gen II, the ladies of Team Rocket wore an attire similar to Jessie from the anime, white miniskirts with a midriff and thigh-high boots, and had hair similar to Cassidy from the anime, long red pigtails. However, due to the lack of artwork for Gen II female grunts, what they're suppose to look like is up to speculation.

In Gen III and IV, the girls of Team Rocket wears a sexy, skin-tight, black, miniskirt with a black robbers hat, white/grey thigh-high boots, gloves, and belt. The skirt appears to be made out of either latex or rubber but it's unknown what the real material of their uniform is. They have a large red "R" emblem on their breasts. They usually have short hair but some variants of them have longer hair. In Pokemon Fire Red/Leaf Green, the official artwork features them with green hair, yet their in game hair is a bright red color. In Heart Gold/Soul Silver, their hair is pink in game and in official artwork. 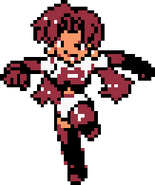 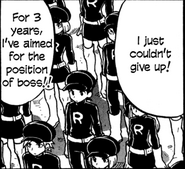 All the Rocket Grunts standing at attention.

Four Rocket girls and their army of cute, evil, villains. 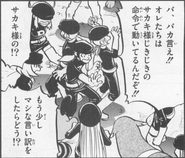 Spotting Celebi while they beat up the potential betrayers.

The evil girls are defeated.

Shocked at the appearance of Giovanni.

Happy to see their boss.

The girls rejoice the revival of Team Rocket.

Leaving to reform their evil corporation.

Very small shot of her face.

Sending out her viscous Ekens to fight the trainer.

Cut off picture of a shocked reaction.

The evil grunts grab and incapacitating the trainer 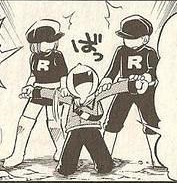 Shocked by the trainers odd reaction to being captured.

After her Pokemon are defeated.
Add a photo to this gallery

A fan made art sheet for a playable female grunt.

The best things about the Rocket Grunts uniform.

The one more sadistic Rocket girl. 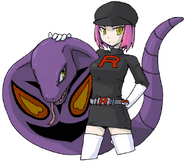 Rocket grunt with her deadly Arbok.

Rocket girl doubting you beating her. 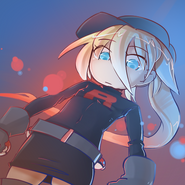 Yellow as a Team Rocket Grunt

Rocket girl thinking she's all that. 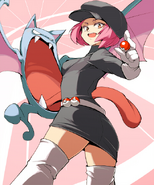 Rocket Girl ready to crush you.

Artists interpretation of a Rocket girl from Gold, Silver and Crystal.

Another Rocket Girl from Generation II.

Black and white picture of a grunt. 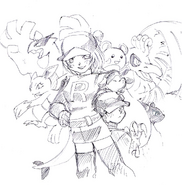 You cannot win against Team Rocket.

Add a photo to this gallery
Retrieved from "https://femalevillains.fandom.com/wiki/Team_Rocket_Grunt_(Pokemon)?oldid=87614"
Community content is available under CC-BY-SA unless otherwise noted.