Start a Wiki
watch 01:48
The Loop (TV)
Do you like this video?
Tawny (Cari Minster) is a secondary antagonist in the 1996 comedy horror film "Satanic Yuppies" (aka. "Evil Ambitions").

Tawny is a receptionist for the evil "Inferno" corporation, which is a Satanic business run by none other than Satan himself. She wants to be his bride, but is denied the opportunity due to her promiscuous nature. Brittany Drake reminds her that being a "bridesmaid" is still quite an honor.

Before the wedding, Tawny is killed by Brittany Drake (Amber Newman) in a blood sacrifice and her soul is sent to Hell. It is here that she receives her reward of becoming a personal assistant to Satan. 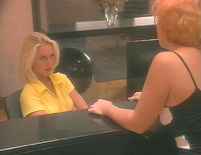 "But I wanna be the BRIDE of the BEAST!" 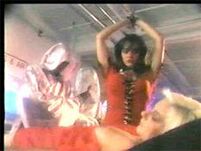 Add a photo to this gallery
Retrieved from "https://femalevillains.fandom.com/wiki/Tawny_(Satanic_Yuppies)?oldid=127547"
Community content is available under CC-BY-SA unless otherwise noted.