Tatiana Creel (Katherine Boecher) is a secondary villain and a Russian spy in the 2010 Jackie Chan movie The Spy Next Door. She is the only female member of this Russian spy squad who are attempting to spread a virus which will destroy all the world's oil supplies except Russia's, thus allowing Russia world conquest.

She and her team start to victimize the children of a single mother when they think the children are jeopardizing the Russian plans.

Little do they realize special agent bob ho is their next door neighbor!

She is a lithe, quite tall blonde, normally wearing black leotard outfits and seems fairly proficient in martial arts of various kinds.

She is finally defeated by being knocked out by a door! 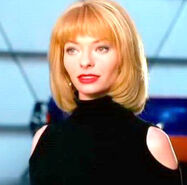 Add a photo to this gallery
Retrieved from "https://femalevillains.fandom.com/wiki/Tatiana_Creel_(The_Spy_Next_Door)?oldid=198343"
Community content is available under CC-BY-SA unless otherwise noted.