Start a Wiki
watch 01:48
The Loop (TV)
Do you like this video?
Taryn Terrell is a professional wrestler best known for competing in WWE and TNA, portraying a villainess in the latter promotion.

Taryn Terrell debuted in TNA as a referee in 2012, before competing in the ring in 2013. She went on to capture the Knockouts Championship on November 19, 2014; defeating Gail Kim and Havok in a three-way match to win the title. Taryn became a villainess on April 24, 2015, during the Night of Knockouts edition of Impact Wrestling. Taryn defended her title against Awesome Kong in a No DQ Match; a stipulation Taryn made after the bell sounded. Taryn defeated Kong after Jade and Marti Bell (known as The Dollhouse) interfered, and after the match, Taryn revealed that Jade and Marti were her friends and established herself as the evil leader of The Dollhouse.

A week later, the evil Taryn successfully defended the title against Brooke Tessmacher, with Marti and Jade's help. She would later feud with Gail Kim, with the feud seeing Taryn make suggestive statements to Gail's husband, Robert Irvine. Taryn defeated Gail inside Six Sides of Steel to retain her title, and then led The Dollhouse's attack on Gail, which resulted in Taryn breaking Gail's ring finger. On July 15, Taryn lost the Knockouts Championship to Brooke after Gail's interference. Weeks later, she was cornered by Gail and Velvet Sky backstage, leading to the duo injuring Taryn's right hand.

Taryn got her revenge weeks later, as she sent Jade and Marti to attack Velvet during her title match against Brooke. Rebel also joined in on the attack, leading Taryn to announce that the evil Rebel is the newest member of The Dollhouse. Taryn announced her departure from TNA on January 4, 2016.

At Destination X on August 17, 2017, Taryn returned to the renamed Global Force Wrestling and attacked longtime rival Gail Kim during her GFW Knockouts Championship match against Sienna, costing Gail the title and resuming Taryn's villainous role. Taryn later antagonized Allie backstage, leading to a tag team contest on September 7, where Taryn and Sienna defeated Gail and Allie. At Victory Road, Taryn teamed with Sienna and Taya Valkyrie in a victorious effort against Gail, Allie, and Rosemary. It was announced on the October 5 edition of Impact that Taryn would compete against Allie, Gail, and champion Sienna for the Knockouts Championship at Bound For Glory, and on the following week, Taryn ended up slapped by Gail after antagonizing the Hall of Famer once again.

On the October 19 edition of Impact, it was announced that Taryn was pulled from Bound For Glory, and on the following day, Taryn parted ways with GFW, making the Knockouts Championship match a three way.

Taryn as the leader of The Dollhouse 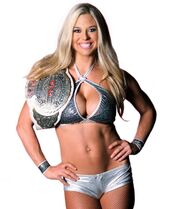 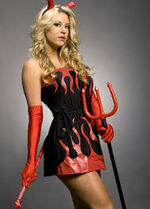 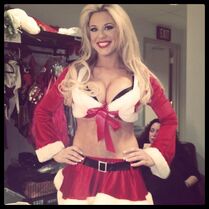 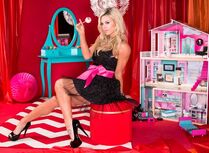 Add a photo to this gallery
Retrieved from "https://femalevillains.fandom.com/wiki/Taryn_Terrell_(TNA)?oldid=102885"
Community content is available under CC-BY-SA unless otherwise noted.