Start a Wiki
watch 01:51
The Loop (TV)
Do you like this video?
Taru (Lauren Heather McMahon) is one of the main cretins in the 1986 Troma film "Class of Nuke 'Em High".

Taru is originally one of the high schools honor students, that specializes in science classes. However, the honor students are turned into Cretins or freeks after smoking one too many toxic joints.  As a result, Taru is now one of the henchwoman for Spike (Robert Prichard).

Taru captures Chrissy (Janelle Brady) and brings her to Spike.  They begin torturing her and are about to slice off her nipples with a saw. However, they are stopped when Warren (Gil Brenton) steps in and distracts them. Then the bloodthirsty mutant shows up behind Spike and Chrissy. The mutant punches his fist all the way through Chrissy's head.  As she lies on the ground dead, the tentacles of the mutant slither across her body. 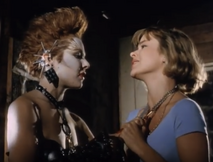 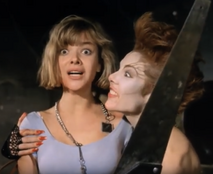 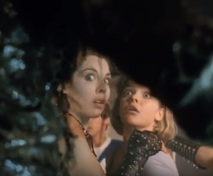 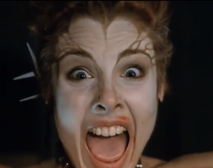 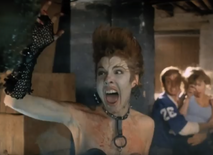 Add a photo to this gallery
Retrieved from "https://femalevillains.fandom.com/wiki/Taru_(Class_of_Nuke_%27Em_High)?oldid=153856"
Community content is available under CC-BY-SA unless otherwise noted.