Start a Wiki
watch 01:50
The Loop (TV)
Do you like this video?
Tara Wood (Natalie Dickinson) is the villainess of the 2009 film She's Crushed.

Her brief backstory suggested (potentially) that she was sexually assaulted in the past, resulting in her spending time in a psychiatric facility. The film's events show Tara still under psychiatric care, along with her mother, with her supervisor Clinton using her for sexual favors. Tara's history also revealed her as a psychotic serial killer, having a habit of dismembering some of her victims and placing them in suitcases.

The film's events have Tara setting her deranged sights on her new neighbor Ray, who she meets after he helps her as she moves in. Later on, Tara picked up Ray after finding him drunk outside a bar, taking him to her house where the two engage in a tryst. Soon afterwards, a regretful Ray returned home and later told Tara that what happened between them was a one-time thing, with Tara appearing to understand.

However, Tara quickly revealed her obsession with Ray, calling him at his house while he was with his girlfriend Maddy and later visiting him while he was out working with his friend/co-worker Donnie, angrily blasting Ray when he rejected her advances and claiming Ray had done several sexual acts with her to Donnie, leaving after briefly keeping Ray's keys from him and stealing the remote (which fell off when Tara threw them to Ray). Tara later bombarded Ray's answering machine with phone calls begging him to talk to her, eventually resorting to maniacally screaming for him to call her.

Tara began stalking Ray in her truck, and after seeing him with an employee at his son Billy's daycare center, Tara kidnapped her, tying her up and torturing her (even doing so while briefly calling Ray again) before killing the woman. After washing her victim's blood off herself in the shower, Tara was confronted at her front door by Ray, who ordered her to leave him and Maddy alone, to which Tara took a knife and threatened to kill herself. Ray attempted to comfort Tara and advise her to seek help, only for Tara to reject him and storm inside. Tara continued to stalk Ray, even getting into his car while he was bringing Maddy to the store, before later approaching him in his work's parking garage to reveal a "surprise" to him: she'd attacked his boss Sharon, who was still alive in Ray's trunk, with Tara finishing her off by stabbing her with a knife. When Ray began to call the police, the evil Tara revealed she'd used his semen to frame him as Sharon's rapist and killer and that she would additionally frame him for attempting to kill her if he called the police. Cornered, Ray reluctantly helped Tara dispose of and mutilate Sharon's body, with Tara mocking Ray's disgust at her actions.

After threatening to "do something crazy" if Ray didn't break up with Maddy, Tara attack Ray's disabled army friend Phil after storming into his apartment, stabbing him in the throat with a pencil. She then went on to attack and kill the hooker who was entertaining him at the time, beating her up and mutilating her hand in the garbage disposal before finally beating her to death. Tara later invited Donnie over to her house for a beer, with Donnie uncovering the still living Phil, having been lobotomized by the sadistic Tara. After Tara found Donnie and mocked Phil's condition, she proceeded to paralyze Donnie with puffer fish poison before lobotomizing him as well, force feeding him her own vomit while having him wear a cutout mask of Ray's face she made.

Thinking killing his girlfriend would make Ray want to be with her, Tara attacked and killed Ray's friend Cassie under the belief that she was Maddy, only for Ray to reveal her true identity when he came over to discuss the police wanting to question him about Sharon's death. After finishing Cassie off with a gun she took from Phil's, Tara knocked out Ray and tied him up in her basement, gagging him with her panties before going to greet Maddy at the door, having called her and claimed Ray was sick and needed her to come get him. As Maddy entered Tara's house, Ray got his gag out and tried to scream for her to flee, only for Tara to knock her out with a bat before she could hear him.

After tying Maddy up in the basement with Ray, Tara tormented and insulted Maddy while claiming Ray didn't love and that she and Ray belonged together, while ignoring Ray's pleas to let her go and forcing him to reveal his infidelity. After placating Tara by claiming he did love her and not Maddy and after Tara managed to get Clinton to leave when he came to tell her about an appointment she missed, the psychotic villainess attempted to force Ray to kill Maddy so they could be together. When Ray (who had just been told by Maddy that she was pregnant) refused, Tara severely tortured Maddy until he finally gave in to her demand.

After hooking Ray up to where she could shock him if he tried to attack her instead of Maddy, Ray seemingly prepared to kill Maddy, only to instead cut her free right before Tara shocked him unconscious. While Tara was distracted checking on Ray, Maddy attempted to strangle her torturer with the ropes, only to be stabbed dead by Tara before she tied Ray back up. After receiving a call from Billy's daycare, the villainess left to go pick him up under the claim of being a member of Ray's family, during which time Ray managed to escape his binds and left to save his son. After catching Tara (who had donned sunglasses and a scarf, the latter to cover her strangulation bruises) driving with Billy in her truck, Ray screamed for Billy to flee before trying to kill Tara, after the villainess cut Ray's Achilles tendon with a switchblade. A bystander stopped Ray, only to have his throat slit by Tara before she went after Billy, with Ray following her.

After finding Billy hiding under a set of stairs in an abandoned building, Tara convinced the boy she was sent by his mother to get him, only to take him into another and kill him (off-screen). After Ray found Tara covered in blood and bemoaned his son's death, Tara knocked Ray out with a metal beam, later lobotomizing him and tying strings to his arms to move him like a puppet. However, after becoming frustrated with Ray not cooperating to her delusions, Tara blasted Ray for (in her mind) ruining their "relationship" before dismembering and killing him, placing him in another one of her suitcases. The film ended with Tara spying on a man outside a restaurant, seemingly having found her new object of obsession. 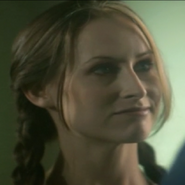 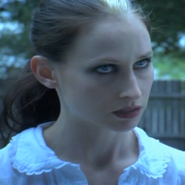 Add a photo to this gallery
Retrieved from "https://femalevillains.fandom.com/wiki/Tara_Wood_(She%27s_Crushed)?oldid=160235"
Community content is available under CC-BY-SA unless otherwise noted.