Start a Wiki
watch 01:51
The Loop (TV)
Do you like this video?
Tanya is a hidden villainess from Werewolf Tale to End All Werewolf Tales, a story from Journey Into Unknown Worlds #29 (July 1954).

The story has Tanya and her husband, Carl, on their honeymoon in the northern woods of Canada. They were at a museum admiring the wildlife display before Carl suggested heading to the aforementioned woods to continue their honeymoon, doing so at Carl's cabin. Tanya becomes concerned over the sound of howling wolves, but Carl calms her down.

The next day, they head to the cabin, with Henri (a French-Canadian tour guide hired by Carl) leading the way. Henri began mumbling about werewolves in the area, and it was days later that Henri called out to Carl after seeing werewolf tracks. Carl later found a photograph of a werewolf, and after this, Tanya stated that she saw Henri running out with camera films. After Tanya expressed fear of Henri, Carl grabbed a rifle and searched for Henri, only to hear Tanya screaming in the cabin and realize that Henri had returned there.

Just as Carl suspected, Henri was hovering over Tanya with an axe, which prompted Carl to shoot and kill Henri. Shortly afterwards, Carl noticed a photo from Henri's pocket: a more clear photo of a werewolf, and it was following the discovery that Tanya turned heel and revealed herself as a werewolf--the exact werewolf from Henri's photo. The revelation came after Carl noticed Tanya's features in the photo, and after her transformation, the evil Tanya revealed that she needed Carl to kill Henri, as he was wearing a blessed pendant that kept her powerless. In another twist, Carl revealed himself as a werewolf as well, and the couple embraced each other in their werewolf forms as the moon rose. 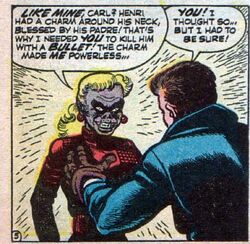 Tanya's reveal as a villainous she-wolf
Add a photo to this gallery
Retrieved from "https://femalevillains.fandom.com/wiki/Tanya_(Werewolf_Tale_to_End_All_Werewolf_Tales)?oldid=83740"
Community content is available under CC-BY-SA unless otherwise noted.