Tangerina (De'Ann Power) is the villainess of of the Click episode, Balls of Thunder. Tangerina's goal is to extract sperm from powerful men and create a sex slave army. It's an over the top comedy with a Sean Connery imitating hero, Rod Steele, who has a device able to induce lust. She has several henchwomen who she sends after Rod Steel to collect a "sample", but they fail. One of the henchwomen, Pussy L'Amour (Jacqueline Lovell) is punished by Tangerina with her pet snake, Stretch, that "never stops". Eventually Rod Steele turns the lust device on Tangerina who ravishes one of her henchman before her lair explodes. 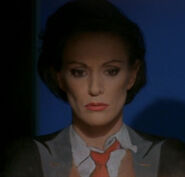 Tangerina in her painted-on suit again

Tangerina in her lair with her pet snake

Pussy L'Amour on a mission

Tangerina in her painted-on suit

Add a photo to this gallery
Retrieved from "https://femalevillains.fandom.com/wiki/Tangerina_(Click)?oldid=91861"
Community content is available under CC-BY-SA unless otherwise noted.