Tamara Fleury is the main villainness in the 1978 comic book Le Treizième Apôtre from the Natacha Hôtesse de l’Air  series by F. Walthéry.

The heroine and her friends set out to find the tomb of St. Mathias, the supposed 13th apostle, somewhere in Turkey. The expedition is led by a renowned archaeologist, Professor Karel. Almost from the outset, the party is regularly targeted by “accidents” or acts of sabotage that may endanger the expedition, or even their lives. Tamara Fleury only appears halfway down the episode, when she is revealed as the behind-the scenes villainess who ordered these attempts. We learn that Fleury is a talented, but ruthless archaeologist who used to be Karel’s assistant. A few years back, he had to let her go because she embezzled several valuable artefacts and sold them for money. Her motives seem to be an evil blend of revenge and greed: on the one hand, she wants Karel’s expedition to fail; on the other, she hopes to snatch the relics from her former master, probably to offer them on the antiques black market as she has done before. The courageous Natacha follows Fleury’s accomplice to their hide-out, an underwater shipwreck. After the Turkish coast guard has been alerted, the villains have no choice but to surrender. Fleury and her henchman end up in jail, where she swears revenge. After the tomb of the saint has finally been discovered in an underground cavern, Fleury suddenly appears on the scene to trouble the celebrations. She declares that she has convinced the prison guards to let her escape, probably by some sort of bribery. She now intends to claim the relics for herself to sell them for a fortune. Her plans are foiled by a sudden earthquake. Natacha uses this momentary diversion to overpower Fleury. Unfortunately, the villainness quickly recovers and fires a shot at her enemy. As the cavern walls are crumbling, Fleury now seems more determined to make Natacha pay for her failure than to save herself or the artefacts. As she prepares to shoot the unarmed and defenceless heroine in cold blood, Natacha is saved by her friend Walter who disarms Tamara by throwing a rock against her hand. Furiously, Tamara now assaults Natacha and a vicious fight erupts between the evil archaeologist and the two friends. Realising that she is outnumbered by one, the ferocious Fleury fights like a wildcat. After a nasty attack from behind where Walter pulls her by her hair and sends her to the ground, she responds by backwardly clutching his neck between her leather boots, then sends his head crashing down against the floor. By doing so, however, she exposes herself to Natacha’s next attack, where the heroine takes an energetic leap to come down right on the villainness’ face with her behind. The impact of this landing must be considerable, because Fleury is forced to release Walter as her booted legs rebound into the air, and is knocked unconscious. On the final panel, Natacha and Walter pant over the outstretched villainness now down for the count. Unfortunately, Tamara Fleury’s arrest is not portrayed, but we know for sure, from one of Natacha’s later remarks, that she’s back in jail for good. 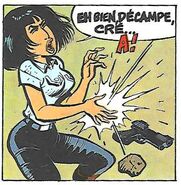 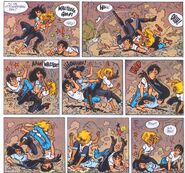 Add a photo to this gallery
Retrieved from "https://femalevillains.fandom.com/wiki/Tamara_Fleury_(Natacha_H%C3%B4tesse_de_l%27Air)?oldid=204953"
Community content is available under CC-BY-SA unless otherwise noted.