Syrene (Leigh Christian) is an evil leader in the 1973 Filipino-American sci-fi film "Beyond Atlantis".

Syrene along with her father rule a remote island of inbred oversized eyed natives. The natives have what looks like ping pong balls for eyes, with black dots painted on them. They are able to live on land as well as in water, and they have an extensive hoard of pearls. Syrene spends the entire film dressed in a skimpy animal skin bikini, and wearing a sharks tooth necklace.

These pearls eventually show up on the mainland, and some men attempt to find the source of these pearls. Here the group encounters Syrene and her people and she agrees to show the party where the pearls are. However, Syrene's father Nereus (George Nader), really wants to mate Syrene with one of the group, specifically, Vic Mathias (Patrick Wayne).

Syrene leads them to beds of pearls and the first mate is mysteriously killed. Vic wants to leave, but Logan (John Ashley) and East Eddie (Sid Haig) want to make one more dive. Syrene enraptures Vic and they mate underwater. Nereus decides that the group must die, and Vic, Logan, Eddie and the crew have to fight their way back to their boat.

Dr. Katherine Vernon (Lenore Stevens) is jumped by Syrene, and a huge underwater catfight takes place. It looks like Syrene has the upper hand, but Katherine is able to escape. When Syrene engages in the fight again, Katherine is able to grab the sharks tooth necklace and choke out Syrene which results in her death. This ends any chance for the race of sea people to continue. They all march into the sea as Logan takes a blanket of pearls from Syrene's funeral pyre. Manuel the Barracuda (Vic Diaz) arrives and tries to double-cross the surviving pearl hunters. A fight breaks out and the case of pearls falls overboard. 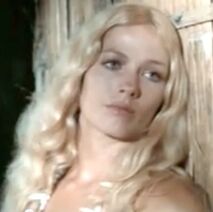 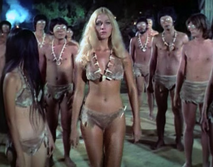 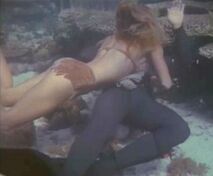 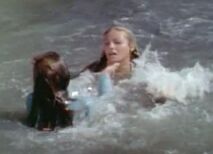 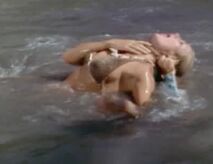 Add a photo to this gallery
Retrieved from "https://femalevillains.fandom.com/wiki/Syrene_(Beyond_Atlantis)?oldid=178071"
Community content is available under CC-BY-SA unless otherwise noted.