Sylvie Garrett (Caroline Sunshine) is the hidden main villainess of the 2017 Lifetime film Mommy, I Didn't Do It (airdate January 1, 2017), which is the sequel to the 2013 Lifetime film The Wrong Woman. She was the best friend of Julie Plainview, the film's main protagonist.

Unbeknowst to Julie at the time, Sylvie was jealous of her, feeling that she was inferior to her best friend. She also had a crush on their teacher, Gene Dutton, and attempted to begin a relationship with him, only to find out that the married teacher was actually in love with Julie—which Julie herself revealed to her mother Ellen. Angry over being romantically rejected, Sylvie turned villainous and formulated a murderous plot in order to exact revenge on her former crush, which began when she answered Gene's text to Julie instructing her to meet him.

After leaving Julie passed out during a night out with a pair of guys, Sylvie grabbed a knife from Julie's kitchen and donned an all-black disguise on her way to meeting Gene. Shortly after getting into Gene's car, Sylvie stabbed him multiple times in a fit of rage, resulting in his death. The jealous criminal's actions and delusional accusations made by Gene's wife turned widow led to Julie being arrested by the police and charged with his murder, as her fingerprints were found in his car. However, Sylvie began to be revealed as the killer when Julie noticed a burned CD in Gene's collection. Most of the songs on the CD were hip-hop songs (which he hated), meaning that whoever was in love with him made it for him.

In the film's climax, Julie met Sylvie near the scene of Gene's murder, informing the latter about her discovery. Much to Julie's shock, however, Sylvie revealed her heel persona and confessed to everything before taking out the same knife and preparing to kill Julie, completely unwilling to turn herself in and determined to get away with her evil deeds. However, Ellen—who had also figured out that Sylvie was the real culprit—appeared, and Julie called to Ellen, to which Sylvie mocked Julie, saying that her "Mommy can't help you now", not realizing that Ellen is actually here, until Ellen attacks Sylvie, saving Julie. The nefarious villainess briefly set her murderous sights on the former before she was knocked out by Julie. After that, Sylvie received the highest price for her evil deeds when the police arrived and arrested Sylvie to convict her of Gene's murder and give her a large prison sentence, thus causing the case against the protagonist to be dismissed at the same time. 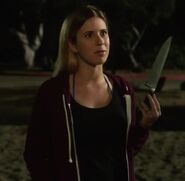 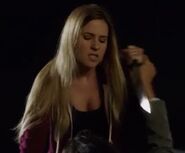 Sylvie attempting to kill Ellen
Add a photo to this gallery
Retrieved from "https://femalevillains.fandom.com/wiki/Sylvie_Garrett_(Mommy,_I_Didn%27t_Do_It)?oldid=203308"
Community content is available under CC-BY-SA unless otherwise noted.