Start a Wiki
watch 01:51
The Loop (TV)
Do you like this video?
Sylvia May is a recurring villainess from Criminal Case: Mysteries of the Past, the 4th season of the crime solving game Criminal Case. She was a nurse at Gryphon Sanctuary who first appeared as a suspect in case #45, "Doctor, Interrupted", before being revealed as a villainess in case #48, "Unsafe Haven" (release date October 19, 2017).

During the case, Sylvia was questioned regarding the murder of Gryphon patient Patricia Rochester, having been the nurse in charge of administering her medication. When approached by the player and Isaac Bontemps, Sylvia appeared distraught by Patricia's death, describing her as an "innocent soul". Sylvia also expressed shock at the reports that someone within Gryphon was taking bribes to unjustly institutionalize healthy people, while claiming to have no knowledge of such activity happening.

But as was revealed in the climax of the case, Sylvia was also the wife of William Oland, who had aided a number of people in Grim Chapel to commit murder among other villainous deeds for the Rochester family (under the alias of "The Devil"). Sylvia aided William in his crimes, and the villainous couple were also responsible for committing sane people into Gryphon in exchange for payoffs. As a result of the Concordia Flying Squad's investigation jogging Patricia's memory, she remembered seeing Sylvia with William the day she was committed to Gryphon, leading Sylvia to kill Patricia by shooting her in the head to keep her quiet.

The evidence (including Sylvia's blood left on a handkerchief from after she checked Patricia's pulse to make sure she was dead) led to her being revealed as Patricia's killer. After initially proclaiming innocence, Sylvia admitted to killing Patricia, and subsequently confessed to being William's wife and an accomplice in his crimes. But when demanded by Isaac to reveal the names of all the people she'd had unjustly institutionalized, the evil Sylvia refused to say anymore before being placed under arrest. Sylvia later refused to reveal the names at her trial, resulting in Judge Justin Lawson sentencing her to life in prison, much to the villainess' shock. 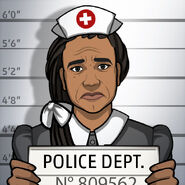 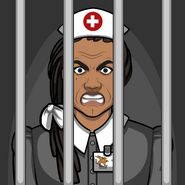 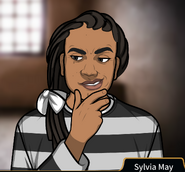 Add a photo to this gallery
Retrieved from "https://femalevillains.fandom.com/wiki/Sylvia_May_(Criminal_Case)?oldid=142560"
Community content is available under CC-BY-SA unless otherwise noted.